If we were having coffee together today, I would tell you... 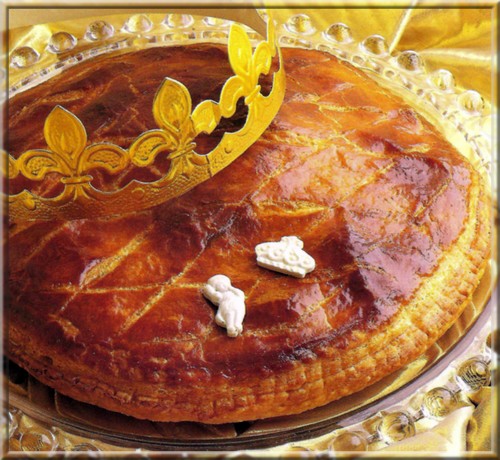 If we were having together today, I would tell you...

to come in first, and not to mind the mud that you would have collected under the soles of your shoes. It has been raining all week and all is wet. The soil is mostly made of clay near the house, so even if we have gravel driveways, it is difficult to avoid a little mud.

Please, do come in. We shall stay in the little sitting room. It may been seen either as snug or as shabby - probably a little of both. And it is in great need of a spring cleaning but that will wait a little longer. Please, sit down. The chairs are comfortable. What do you prefer? Tea? Coffee? Cider? Fuit juice? Water? I am afraid there is no soda, no fizzy drink, and only natural fruit juice. Will that be fine for you?

You know that the great news of the week is that we have  the help of a Shopping-cum-Cleaning Lady, whose name is Marlène. She drove the Girls to The Supermarket and to The Village for the magazines and medicines. The Girls are very enthusiastic and speak highly of her. So highly that I felt a twinge in a corner of my heart and wondered if I was really that useful or if they would not be happier with new people. Jealousy is a fault, and I do not want to keep The Girls to myself, but I don't know what I would do without them now that I left everything for them. I confess I see myself as my sister's old Teddy Bear: useful and a companion for a while, then discarted and thrown away. After all, I have no more other family and no more friends... However, I promised THEY would be happy. If they are such with this solution, then there is nothing better I may do but to resign myself.

The other great news is that we have come to the end of the Advent-Christmas season. I thank you to have followed me through my ramblings and memories. I have met you, and you, and you: lots of new people, thanks to Solveig and Trent and Hammad, among others. I am glad of these new acquaintances as I am glad that you, and you, and you, older friends, have shared my talks.

To end the Christmas time, the French celebrate the Feast of Epiphany, when the three Magi/Kings came from the Eastern world to adore the Child in his manger. At home, we had either the galette with marzipan or the gâteau de rois, which is like a brioche, with or without fruits confits (candied fruits) on top. 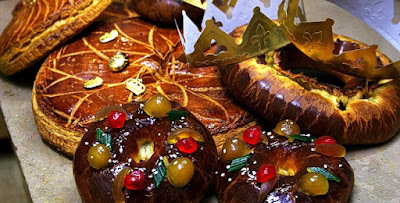 This is a picture of the galette à la frangipane that was found initially in the Northern parts of France, and the gâteau brioché avec des fruits confits which is still found in the South of France, near Bordeaux for instance. 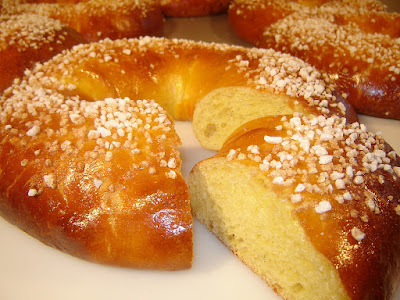 But this above is the gâteau de rois you find in the Dordogne. It is a simple brioche in the form of a crown, with only those big grains of sugar that crunch under the teeth. The gâteau is found after Christmas and until Lent at least, with a break for pancakes on February, 2nd. It is eaten as a dessert with clementines or with une salade d'oranges, and a cup of coffee, or for breakfast and any occasion where you drink coffee. You know, tea is a recent thing only in France. In the nineteen sixties and seventies, it was still something "posh" that was drunk at  five o'clock in the afternoon by ladies and sometimes gentlemen. Think of the trade history in Britain and France, and you will understand why it was still something unusual for most people - and expensive as well. Cider is drunk preferably with the galette if you are in Brittany or Normandy, and with champagne or other bubbly wine when you celebrate the day of Epiphany, or on some grand occasion.

All cakes have something in common: hidden in the pastry: this is "the bean" - la fève -, which is either a plastic or china little figurine. It started in the Middle-Ages by being a true bean, and slowly became something fancy. Nowadays, there are collectors of these figurines that come in series: Nativity characters, houses, Disney characters, whatever.

But the ceremony of the gâteau de rois is more complex. There must be as many slices as the number of guests around the table, plus another one of the first poor person that would come to the house. Then, the youngest member of the family, goes under the table, and the father asks: " For whom this slice?" and the child names one person. This goes on until everybody has been served. One slice at least must remain, not to be eaten by the guests. Then, if and when one of the diners finds la fève, he or she is declared King or Queen and must choose his or her counterpart, put the crown of golden cardboard on his or her head, and drink. The aclamation is the shout: "Le roi (la reine) boit!" (The King - the Queen - drinks!). Then, the other guests may toast the King and the Queen and drink as well.

Of course, what a fellow reader in one of my online reading groups calls the yearly "tinsellectomy" cannot happen as it does in Anglo-Saxon countries, the day after New Year's Day. The Kings/Magi are due to arrive at the stable, in the Nativity scene, on the Epiphany Day or Sunday named by the Church. For instance, the Kings/Magi statuettes were put before the Child last Sunday in church, with the camels at the back of the scene, and on Wednesday at home (on the 6th of January), and are to stay until the Baptism of Christ (this Sunday in Church). They will linger a little at home and the whole scene will be packed until the end of this year; on Thursday when Marlène comes to help me clean the house. 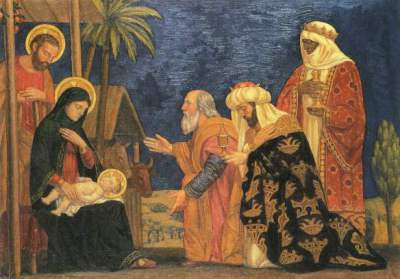 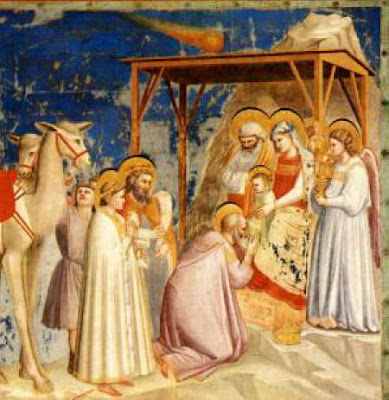 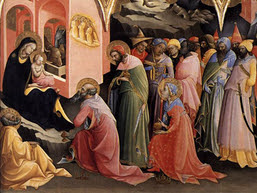 Chances are great that you will see nothing again of this organised untidiness when you drop in next week for your weekly chat. But there will still be some gâteau de rois: you will have to tell me that you want something different - biscuits, shortbread, cannelés... - if you don't like this cake, as it will stay on and on now.

Spring will have come inside, I promise. It has already peeped through the door, in the kitchen. I shall show you more next week.

But it is late and you may be visiting other bloggers or hosting an event yourself. Or you may have something else to do, better than staying nattering with me. I shall say bood bye, and thank you to have spent a moment with The Girls and me. And leave you with a thought a fellow blogger who is a vicar in the North of England told us, his readers, at the end of his post about architecture. He told us of the service for Epiphany in his parish and church and let us with a reminder of his wife: 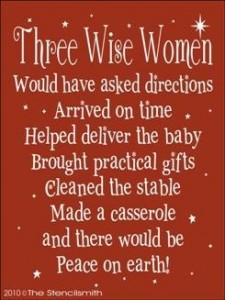