On the tenth day of Christmas - Leaping and dancing: happiness! 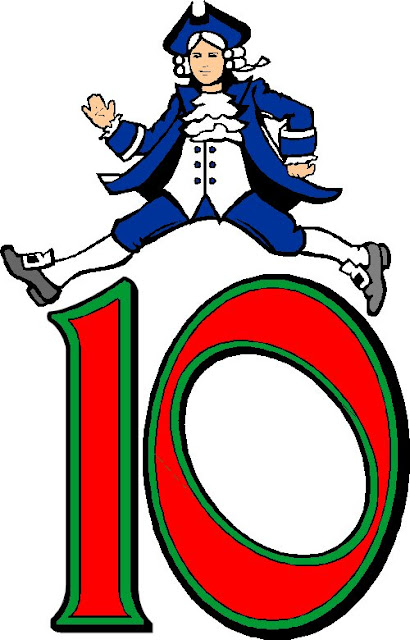 According to the tradition, the Ten Lords represent the Ten Commandments:

I understand the necessity to remember the main tenets of the faith but, indeed, this is no great fun on the twelve days of Christmas! I like the idea of the Lords a-Leaping better than the Ten Commandments - may the Lord and the Roman Catholic Church have pity on me.

The Ten Lords a-leaping make me think of dancing (thanks to the simile my sister makes with some ballet dancers and frogs), and of the tradition we have in the family to watch the New Year's Day Concert in Vienna on TV. Whatever was to be done that day - and it was most surely a family lunch with Grand-Mother and Grand-Father and various Uncles and Aunts - it was a rule to push it back after two o'cock in the afternoon.

In France, the concert is seen "live". Therefore, at a quarter past eleven, when the first notes of Marc-Antoine Charpentier Te Deum were announcing the Eurovision broadcasting, all family was gathered in the sitting room, somewhat uncomfortably perched on chairs, in front of the TV set.

I have to digress somewhat. There was a TV set almost at the very beginning of TV at both my grand-parents. Mother and Father were then very used to TV and we grew up with TV as well. But in all houses or flats or any dwelling, the set has been placed in an uncomfortable place. The only concession was that it was in sitting rooms but at such an odd angle that nobody could watch any programme for long without getting a lumbago, a squint, a stiff neck, or other benign but very real ailment. The reason was that nobody should stay long in front of the screen: that was unhealthy and there were several better things to do. I confess that some remnants of this attitude stay with me as it IS still uncomfortable for the Little family to watch TV. One of us gets an armchair and may see things properly; another may get a less comfortable armchair, set in in a gap in between a sofa and the wall, see things from an angle, and get both lumbago and stiff neck; the third gets a straight back wooden chair absolutely uncomfortable, and may do a crossword puzzle better than watch the programme. I may change it one day but old habits die hard...

So, to come back to the NYD concert, Mother was in the comfortable armchair and all the others perched as they could. 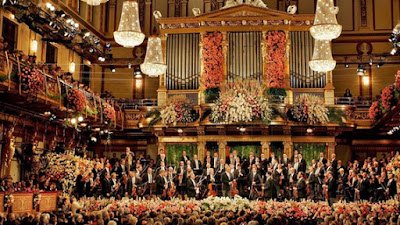 There were comments upon the Musikverein, the flowers, the concert from the year before and its conductor while the commentator was talking to make people wait patiently for the orchestra and the maestro to be ready. We stopped talking when the conductor entered the auditorium. One could have waited for us to applaud since we were so intensely transported to the concert hall. 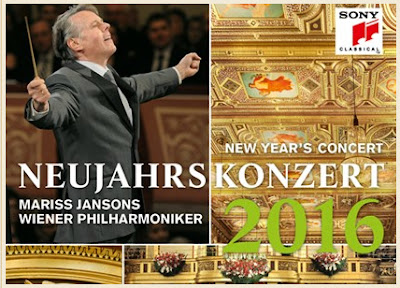 Unanimously silent and listening. Intent. Some closing eyes. Some intent on the joke to come. Relaxed and happy. One of the few times when my whole family was gathered and relaxed. Communion between the conductor and the orchestra, among the members of the orchestra, among the conductor, the orchestra and the family. Bewitched. Deeply happy. Laughing at the jokes. No criticism. As if we were in the concert hall and at the same time, a united family in a country house rather shabby but comfortable sitting room.

Of course there was the habitual tourism and promotion of Wien and the Donau and the vineyards forever associated by us to Schubert - don't ask me why -, the Little Vienna Singers and the kitsch of the dancing in the Prater, the Hofburg or Shönbrunn, when the dancers go and run in the various rooms, "playing hide and seek" as my sister said, and "leaping like frogs" (here comes the simile). 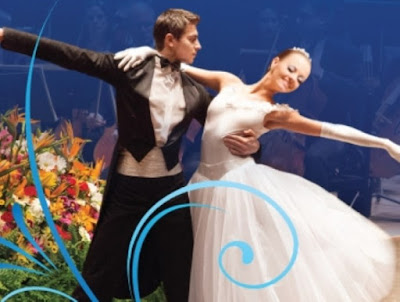 Grand-parents and other members of the family would arrive and join us little by little. And, please, do not laugh now. Grand-Father only knew how to dance the polka and would invite Grand-Mother for a polka lente that would turn into a polka rapide; they would laugh like young people. Father would ask my sister for three or four turns of a waltz, and as much as she sings flat, as well she has the rythm of the dance in her. I was asked by sheer politeness as I am as stiff as a broomstick! Mother was asked  by Father (always) demurely for the Blue Danube, at the end of the concert. And we all clapped duting the Radetzky March, following the instructions of the maestro. We were entranced and stupid. But immensely happy. 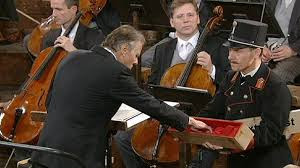 After the concert, Father would say that it was time for him and us all to refresh our memories by some useful reading about Mittel Europa, by novels by Musil, Rilke, Schnitzler, and authors of the defunct Austro-Hungarian Empire. That would take us through the lunch and most of the afternoon! I still have my Mittel Europa crisis in January...

Now that there are only The Girls and myself, we are still ready by a quarter after eleven in the morning. We start lunch during the intermission but nothing would make us move when the concert is resumed. I invite my sister for three or four turns of waltz - usually the Blue Danube - and sometimes another one. We laugh at the jokes. We clap during the final March. And we shout "Bonne Année" as an answer to the orchestra and the conductor's wishes. I think it is one of the few moments during the end-of-the-year festivities when we are truly happy and with no more self-consciousness, grief, and sorrow. Therefore thanks to Klemens Krauss and the Eurovision at the end of the 1950s!

We are neither leaping nor gambolling on the first of January, and it is not the tenth day of Christmas, and yet, we feel like the lords that 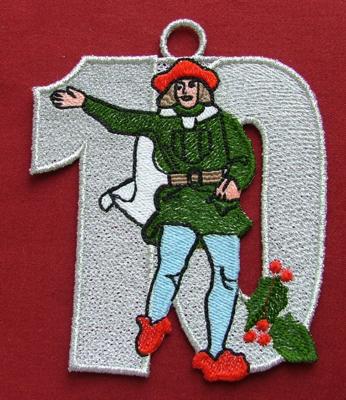