The twelfth day of Christmas - Epiphany 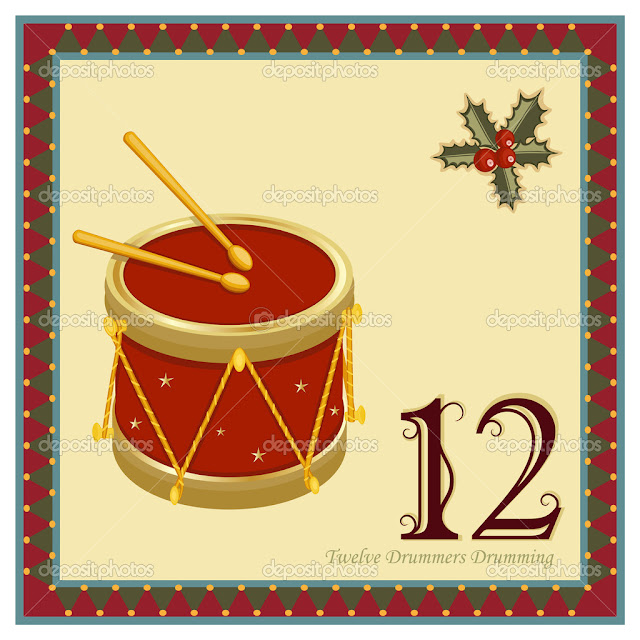 According to the tradition, the Twelve Drummers represent the twelve points of belief of the Apostles' Creed. I shall not bother you with the content of the Creed: it is either known or to be found, if you are interested, somewhere online, although I have not checked.

The Twelve Drummers, for me, coincide today with the Feast of Epiphany, as it seems I started a day too late. The RC Church celebrated Epiphany last Sunday but the true date is the sixth of January. In France, it is the day where we eat a special cake - according to the regions, a galette des rois (mostly in the Northern parts) either with frangipane or not, and a kind of brioche in the Southern parts with or without fruits confits but always big grains of sugar.

As we belong to the North through Father's family and our living in Paris, and to the South through Mother's family and The House in the Dordogne, we have both cakes. Do not think us greedy: the tradition has now been made wide; the season of these cakes begins after Christmas and lasts well until Lent, that is February and sometimes March in the case of the brioche kind, with a break for pancakes at the beginning of February. Therefore, we have (almost) all the time in the world to taste the galette à la frangipane and the gâteau brioche des Rois.

I shall tell you more about the traditions attached to the celebration and the cake when you stop by to have a cup of coffee or tea on Saturday as these are the very beverages to drink with both cakes. Unless you prefer cider or champagne. Meanwhile, I thought you might like to try your hand at baking a galette. So here is a link to a blog that will give you the recipe: 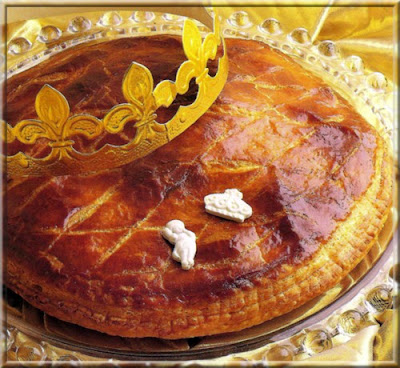 And so, friends and readers, the Twelve Drummers drum us out of the Christmas time. One more Sunday for the RC Church with the Baptism of Christ in Jordan, and we are back to the "ordinary liturgical" time also called "time of the Church". We leave the gold, red and white collours of Celebration for the green of the usual. Time for us to pack the decorations and drive the tree to the déchetterie (waste disposal site) of The Village, after what a fellow reader in a reading group calls "the annual tinsellectomy".

I am always sad when this time comes, as many people I believe. But in France it is time to send greetings for the New Year. Postcards are to be written and sent from after Christmas until the end of January, which is different from the Anglo-Saxon custom of sending "Season's Greetings" before Christmas. This is coming to France as all things Anglo-Saxon, but, at home, we keep the French way.

There is also a saying in Dordogne that comes true on the Fest of Epiphany:

A la Sainte Luce,
les jours avancent d'un saut de puce;
pour les Rois,
ils avancent d'un pas de roi.
I shall not be able to keep the rhymes but the meaning is that for Saint Lucy (Luce), the light is growing as if making a chip leap - this is linked to the Julian Calendar  (see:
http://camilledefleurville.blogspot.fr/2015/12/on-december-13th-and-third-sunday-in.html) -
but for the Epiphany and the Day of the Three Kings, the light is growing as if making a king's step, which means that from that date the light truly begins to be longer. Winter will be with us in January and until the middle of February. Afterwards, Spring will come in. In January, snowdrops will appear. Mimosa trees will start blossoming for the second of January and the pancakes, and daffodils should be here by the end of February, beginning of March, IF the weather keeps its ancient rules...

Meanwhile, there will be hyacinths in the house and hardy narcissi that have been planted regularly since Autumn and kept in the dark.

So, let the Drummers drum and let us thrive indoors with books and music still for a while. But good bye Christmas: after having received the presents of our true love, for us, of the Northern Hemisphere, Spring is on its way! 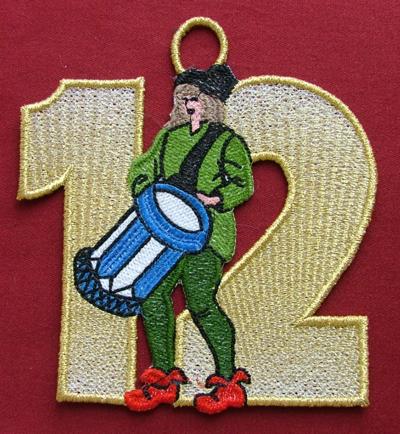