To be or not to be a Kaiserin

Since our quite disastrous experiences in hospital and the more disastrous blow up of The Little Family, I have not been able to concentrate much. I sit in front of the screen of my laptop and vaguely browse the Net without any decisive attention. There are books around me but I do not feel much like reading. I do not feel like writing. I do not feel like going into the garden and do something about the rioting wisteria. I dare not think too much and too often about Elder Girl who is still in hospital far from us and whom we are not able to visit. I am awkward and fidgety because I cannot see properly. I am restless and I cannot envisage what the future will be - and I mean the immediate future as well as the longer one.

When I was a child I remedied to such issues by pretending I was someone totally different with another name, sometimes another nationality, certainly not the same age, perhaps not of the same era. I was another I.

I spent days - and nights before I fell asleep - living wonderful adventures. I used to choose to be mostly older than I was really. I remember when I was about eight or nine, I was the Empress Elizabeth of Austria - well, why not when you imagine? - and solved arduous diplomatic problems for my husband the Kaiser Franz-Joseph, with the Hungarian nobility - this was not great fun as it was true the real Kaiserin did it -, but I even charmed the ruthless people from the Balkans into an amiable peace among them and a complete obedience to Vienna. Princess Elizabeth of Bavaria was sixteen or seventeen when she married her cousin Franz-Joseph, and I thought this a grand old age. Coming from a family where there were two or three generations before me (great-grand-mothers, great-aunts and uncles) and therefore who were borne away by a steady trickle of deaths, I saw Mother and my Aunts ensconced in muted colours of respect for the Dead, and I thought it was only natural to begin to live early and face the tasks of establishing peace in the Balkans. I had no doubt that my real life would be what I was dreaming about and thus could not see the reason why my parents, my family and their friends were so upset about what was happening in the world: a few years later, I would be a true born diplomat, marry some future king or emperor, and charm the population with the smile similar to that of Romy Schneider in the Empress Sisi films. A happy end was guaranteed as when I went to the movies.

There were tricky moments in my day-dreaming. I was more than often caught up red-handed so to speak in the act at school where I did not listened to the lessons which bored me, and at home where I was nicknamed "Princess" and treated with some irony in order to pull me down to earth.

This welcome of my dream life - that was not welcome at all - contributed to turn myself into a prickly hedgehog and to turn more and more to solitude where I found to feed my dreams in books and in writing. I used to sit at my table in my room and to scribble in green ink with a proper fountain pen on coloured sheets carefully illustrated with awkward copies of drawings or maps, surrounded by history and geography books mainly but not exclusively: when called to bring peace in the depths of the ex-Austrian Empire, I thought reasonable to know facts upon the countries I would have to reconcile.

My parents were comforted by the fact that I was kept busy and were deluded as to my day-dreaming until the day when I was asked what I was doing, and when I was demanded to produce my last written effort. It was a little booklet of some fifty sheets that I had sewn together and of which I was rather proud. The booklet was handed to Mother to be read and discussed with Father. I was called later in the week and met by a court martial. By a fateful coincidence, the reading of the booklet occurred at the same time as a call by my French class teacher who complained that I was a good pupil who did well but never learnt her lessons. I knew things without studying the rules and that was a capital crime for her. This was made a capital crime for me too and I was ordered not to squander time over the kind of useless effort that was my booklets and to learn my grammar lessons instead. I asked why, as my French compositions, orthography and grammar tests were the top of the class, without mistakes. I was answered not for the first time of my short life that rules were to be obeyed. I looked my parents in the eyes and said clearly that I did not see any reason to conform to rules that were idiotic. Punishment was to follow. I realise now that my parents were right but punishment would have been absurd if they had taken from me the objects of the offense: books, paper and ink, instrumental to my lack of discipline towards school. Obviously I was only non-conformist but not unwilling to learn and I was still top of my class. They settled about depriving me of dessert, which was a token punishment as I did not like sweets and much preferred the fruits I was given instead.


Speaking of movies (this is going to be a meandering entry), I first went to the cinema without my parents with a friend and her mother as chaperone to see the three Marishka films, Sisi, Empress Sisi, and Sisi Facing Her Destiny. I was eight and it was during the holidays in The Village. My friend's mother was Mother's friend as their own mothers had been friends before. It was a kind of hereditary friendship with ups and downs as my friend's family was rather lunatic and prone to take offence for anything they might think a slight. However we were in an "up-moment", and her mother's had suggested she would take us to see the three films, three Sundays in a row. Of course, she would be discreetly in a seat one row behind us. No apparent chaperoning for us, thank you.

The cinema was an old place with dusty red velvet seats. Dust permeated the whole hall and danced in whatever light there was when we came in. There was still a short film and a cartoon  plus adverts  before the interval when the cinema's owner sent his wife to sell sweets and ice-creams. We had been provided with money and bought the most delicious ice-creams that we licked assiduously. There was an awkward moment when my friend's mother told us not to giggle and to be careful with running ice-creams, otherwise it was delicious. Then the great red velvet curtain rose up again before the screen. We were engulfed in the throes of Princess Elizabeth von Wittelsbach and her family, and the engagement and marriage policy of the arch villain, her aunt, the archduchess Sophia von Habsburg. About an hour and half later, love triumphed, organ boomed, Sisi married Franz and we, girls, were sharply told not to waste more time looking at a blank screen since it was tea time. The dust motes danced again before my ecstatic eyes. I knew for sure that this was my destiny. I was to marry a prince, a king, an emperor, a general like the general De Gaulle, and would devote my life to his Nation. My friend decided on the spot to marry one of the same heads of State to get dresses and jewels. Without any care for our exalted persons, her mother propelled both of us towards the exit door, sunshine, heat, and her car to bring us home.


We lived the same experience during two other Sundays which fortified me in my will to serve the State and become a graceful diplomat for the sake of my husband.

I day dreamed with a purpose now. I ransacked the house for history and geography books. I asked Father questions about the Austro-Hungarian Empire and discovered that there were biographies about Kaiserin Elizabeth. I pleaded for a pocket money advance and a trip to the bookshops in Périgueux in order to buy at least one. My parents were ot too eager for the pocket money but as it was for history books, they relented. 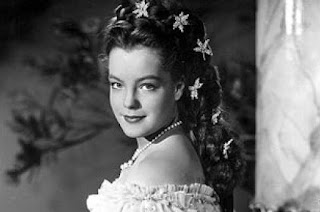 How sad we were when we emerged from the cinema after the last film on the third Sunday. Life was nor worthwhile anymore without this wonderful story. But I was both the most affected and the readiest to meet this deprivation: books were waiting for me and I was able to play the films in my mind - to re-enact them endlessly as well as to create a prequel and infinite ‘paraquels’ and sequels. In fact, I had discovered the power of imagination and the power of books.

The books are still here. We have bought the films in DVD format since The Girls have felt for them in their own time. I shall not be a diplomat negotiating peace in the Balkans. I shall not marry prince, king or emperor - and certainly not a general who would become head of a State.

Perhaps - only perhaps - one day, I shall be able to concentrate and write again - with more doubts than in childhood -, books that will be the follow-ups of the incriminating booklets in green ink.