On the eleventh day of Christmas - Piping in Scotland 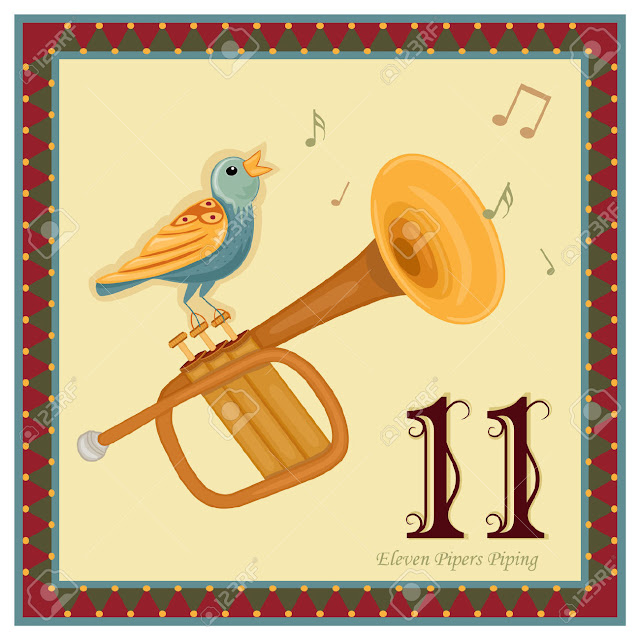 According to the tradition, the Eleven Pipers represent the eleven faithful apostles, that is all but Judas Iscariot, the disciple/apostle who betrayed Christ by denouncing him to the High Priest and giving him the famous kiss in the Garden of the Mount of Olives, thus enabling the guards to arrest Jesus. My own feeling - but the RC Church and Christianity at large may well disagree - is that the eleven remaining apostles were not too faithful either, as they badly let down their "leader" by fleeing, or by saying they did not know him (Peter), or staying close enough to listen and report in the Gosel afterwards, but far enough as well not to be caught and suffer the same death (John). But I have always said that I did not know what I would do when confronted with suffering, martyrdom and death. It is easy to pass judgement, however the most comfortable position, and the survival instinct might push me to flee.

Now, as to the choice of image, I hesitated between this one and two others: 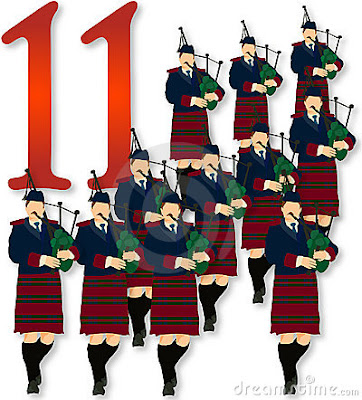 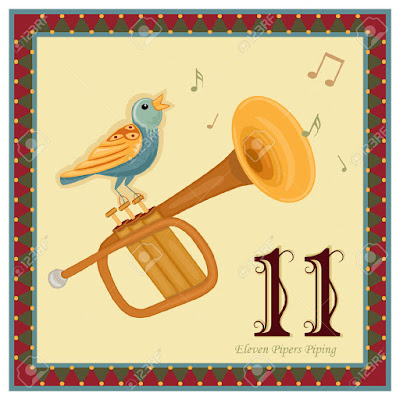 The last one, which is the one I chose seemed the most poetic; the middle one was in harmony with the preceding ones chosen the days before, but too slender to my taste; the first one was ... Scottish and more modern.

I never lived in Scotland but we spent holidays there. And that was the crowning of a time where I was madly in love with "Bonnie Prince Charlie" and when I was crying over the defeat of Culloden. I was writing a secret diary then - I must have been around eight or nine - in green ink (!) with a postcard stuck on the first page of a Scot piper before a loch and mountains in the distance, dotted with sheep. The postcard had been sent by my godmother who had spent holidays there before we went, and sent me this special card. She knew nothing of my great passion, as I thought, did all my family. But I suspect my interest was known by anybody who cared about what I looked for as far as books, images, magazines, and everything related with the Highlands was concerned. I thought the Highlanders were far better than the Lowlanders and was very disappointed when my parents told us we would go to Edinburgh and spend some time there. Edinburgh? Pah! Give me the North!

My love had begun with a book of course. I took it from the school library and never have been able to find it again. It was the story of a young boy, Alistair MacSomething, and his "bonnie lass", a friend - not a girlfriend but a friend who happened to be a girl - Moirag MacSomethingElse. She was described as having black hair and des yeux mauves, couleur de bruyère (purple eyes, heather colour), and was a tomboy, even for our days. I identified with her as my heroines were always tomboys, and I identified with the boy. But I fought like the boy, and was in love with Bonnie Prince Charlie as all girls seemed to have been in the Highlands of around 1745, in the book. 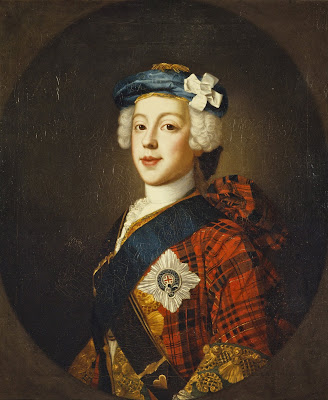 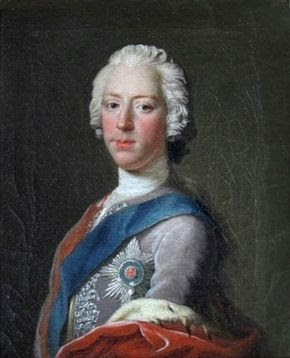 Of course, I knew nothing of the real life and works of the "Young Pretender" and was utterly disappointed when I learnt who he was really later in still young life. I knew nothing of Flora Mac Donald and thought she was a good friend, an older Moirag, a woman Moirag. And the Pretender stayed always brave and  young in my mind. I never thought then that he could have been with faults and made errors.

He was a descendant of  Mary, Queen of Scots, who herself, had been a Scottish martyr after having been the daughter of a French princess, raised and taught at the French Court, and very shortly Queen of France. Mary was a saint to her evil cousin Ellizabeth Tudor who had been unfortunately the daughter of the great English Bluebeard, Henry VIII and of a woman of dubious mores, Anne Boleyn, for whom he recanted the true faith, and had the legitimate and only Queen of true blue blood, Katharine of Aragon, die. Henry VIII was an error in himself and in his father who had evicted the Yorks from the throne, and the Yorks were dubious people as well as they had evicted the Plantagenets-Lancasters: I was a faithful follower of Henry V, after having seen Kenneth Branagh's movie and Kenneth Branagh himself, as Mother knew him.

This was all far-fetched, confused, and clumsy but I thought it very clear, and, to make this short, I think, in retrospect, that I liked the atmosphere as I liked the atmosphere of the "Three Muketeers" and the other Dumas novels, blended with the exaltation of Shakespeare theatre, and children books by Louisa May Alcott - Jo in "Little Women", and of course, Rose in "Eight Cousins" and "Rose in Bloom".

Going to Scotland on holidays was the means to reach my imaginary country, to meet my heroes, to fight with them and to re-write history as we were wont to win! Going to Edinburgh was a slight deception. It lacked breath and breadth.

But I followed gratefully the rest of the family with dreams buzzing in my mind and diary in my own small suitcase that I carried myself. From this first trip, I remember the castle, very black upon a leaden grey sky, on its steep hill, up and arrogant and strong. I remember Princes Street and the Gardens. And there was a bookshop there where we used to go almost every day (you must know by now that we were all bookworms...). I could have stationary bought for me. Mother explained also that were I more disciplined and mindful, I might have abridged versions of history books and of novels by Sir Walter Scott in English. I promised everything she wanted and I had the books as well as a little volume encased in a plastic tartan cover with a clasp: poems by Robert Burns.

The rest is blurred in a daze of happiness. I know  and remember vaguely  that I saw my first Peploes and Scottish colourists. 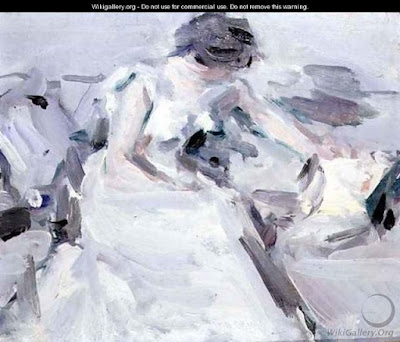 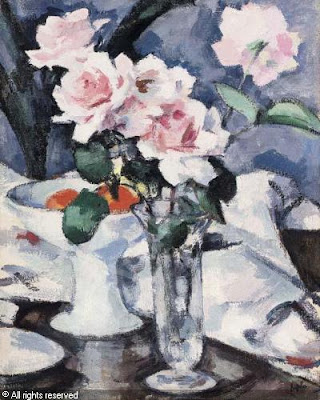 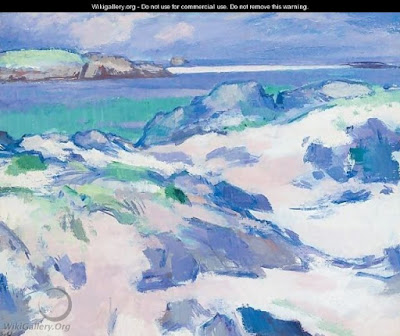 We went up North, at long last, and I made some sort of pilgrimage in the Highlands. I could not understand and would not understand why the Campbells were dubbed traitors. After all, the family name of Rose and her seven cousins in "Eight Cousins" was Campbell, and there could not belong to a family of traitors.

I loved the landscapes. They were the true revelation of these holidays. I was not prepared to the real beauty and loneliness of them. I loved the lochs and the sea. I listened to Father's voice reading Burns and Mother telling me stories from Scott before going to sleep. They related with what I saw during the day even if I understood but a little of those. I was like a sponge and imbibed what I watched and heard, made a muddle of it in my mind but the whole bundle would come out one day and sort itself out without effort. As with music inVienna, it was sheer and deep happiness.

This is why, today, I put the Scottish pipers as it is when, 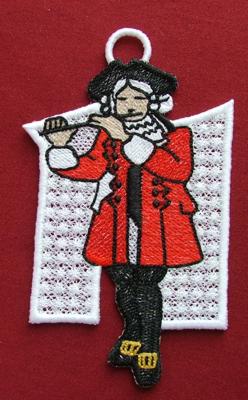