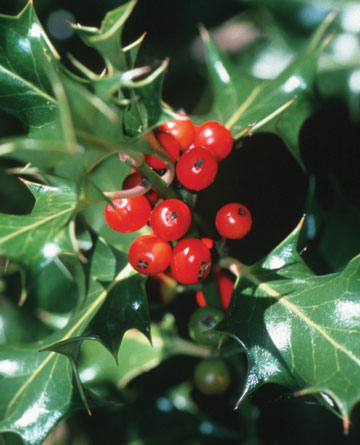 On December, 7th, we found a sprig of holly

What is more Christmassy than a branch of holly? Wherever we were when Christmas came, there was at least one holly garland at the door, even when we lived in flats. There was one notable exception: the year when we were in Florida. There, we had a house that was near a beach of piled white coral and a transluscent green ocean, flamboyant dawns and sunshines, palm trees hung with plastic garlands, and poinsettias everywhere. It was warm. It did not feel like Christmas at all. And the year before we were living in Sweden. That Christmas remains in our minds as the most exotic and strange we have ever seen.

But when we were "at home", in the country house where The Girls and I are now living, we made expeditions in the woods, up on the hill, to cut the holly that would be needed by Mother, by the ladies who would be "doing the flowers" at church, by neighbours who could not or would not go into the woods.

Up the hill are the ruins of the fortified castle that was finally dismantled under Mazarin after la Fronde, that is in the interregnum when King Louis XIII was dead and his son, Louis XIV, was too young to reign effectively. Then, the aristocracy wanted to go back to more autonomy and less royal directives, less State (as we would say today), more privileges on their possessions. The Cardinal de Mazarin and the Queen Regent, Anne d'Autriche, fought during long years to keep Louis his throne and they won: the modern State was born.

Our medieval fortified castle was already half a ruin and the armies of Mazarin ha no great difficulties to bring it almost entirely down. There are still a few rooms: the kitchen, the chapel, the armory and the guardroom, a kind of drawing room, towers half pulled down, several bartizans, and the forgiven area where, in one semi collapsed tower, lie the formidable dungeons.

Of course, it is a delight for all young generations that succeeded each others.

At the beginning of this fateful XVIIth century, which would see the definive end of the castle, an original ancestor had thought about building a "folly", lower on the hillside. These were the foundations of the house in which we have lived since the end of said XVIIth century. And this ancestor had created a garden that was intended to go from the medieval castle to his new  house. When going up the hill, approaching the ruins, we still find old alleys, lost designs of groves, thickets, and copses, ancient fountains where no water runs, and, marking corners or old flower beds turned to wilderness, boxwood and holly bushes, among other shrubs that became trees. This is not without looking like the description of the château des courants d'air by Théophile Gautier in his book "Le Capitaine Fracasse". 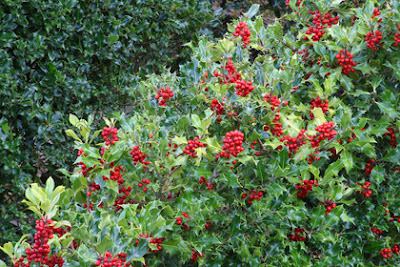 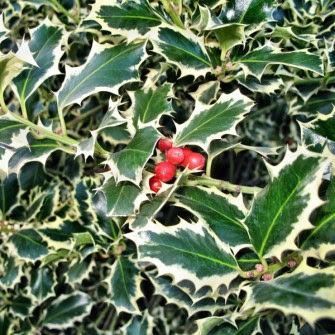 There we could find the spiky booty we were looking for. Warmly dressed, gloves and caps on heads, my elder brothers armed with the tools needed to cut the different sizes of branches, we were sent with lots of recommendations and prohibitions, like a flock of sparrows, dancing and running, singing, shouting and squealing in the paths and tracks that we knew by heart.

We had a well defined mission: branches were needed to mke wreaths for the doors: 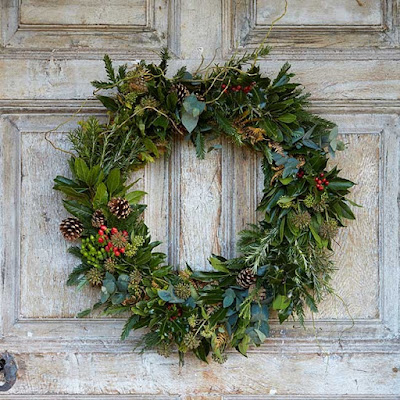 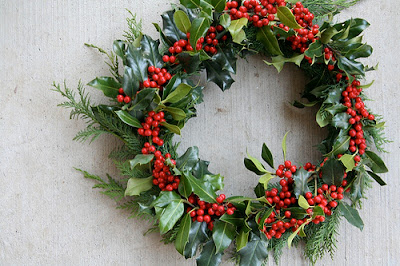 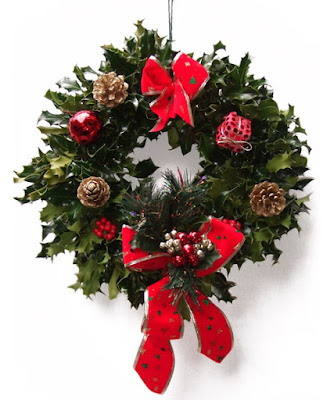 Suffice to say that the honour of Our Village was in our hands. We were happy, carefree, the elder pulling and pushing the younger, and the disabled helped by all in the difficult passages. We lost a glove here and there, forgot a cap on a bush at the turning of a path. The cuts were made and put in the baskets that we had been given. Some blood ran from tips of fingers but that was shaken without compassion. We usually went up till the first ruined defences and towers of the castle.

There is a wall there, that has been made low enough to sit down upon it and have a look at the valley, the River, and the hills across. We used to have a pause there and to verify what we had and what we missed. My elder brothers made sure we were still well wrapped up, counted gloves, caps, and woollen scarves. We usually stopped talking, took a long breath, and admired silently the view. The trees were bare except for the pine trees, always green, and the oak trees that kept some of their autumnal golden splendour slowly turning to brown. The River like a snake writhing between a hedge of poplars. Light blue sky. Cotton-like clouds. A touch of rose pink in the West. Smoke from the chimneys of Our Village. And The House like a nest beneath us among the trees and well kempt gardens and orchard.

It was time to rush down to the cosiness of the end of the afternoon with indoors activities, and the snugness of a cup of hot chocolate or tea. 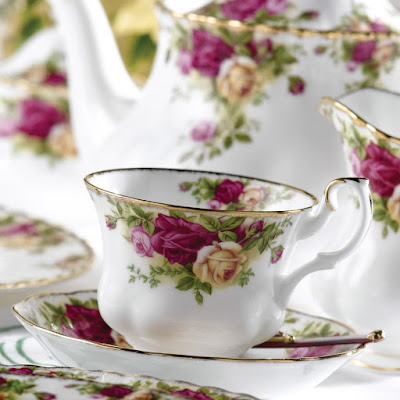 A wreath of holly will welcome visitors at the door this year again. And a sprig will crown the Christmas pudding sent by our British friends in late November.

https://youtu.be/pI7NY7IFTt4
The Holly and The Ivy (Saint Paul's Cathedral Choir)
Posted by Unknown at 10:53