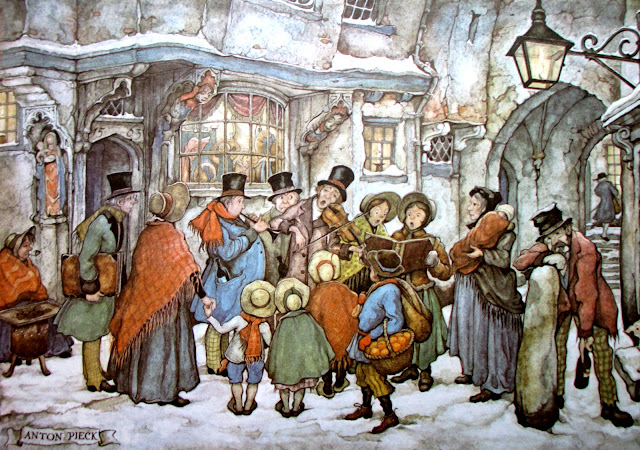 There is no carol singing in the streets in France. This is a tradition I discovered when I started reading English or British literature. We have concerts, mainly in churches, during Advent, and they have nothing to do with the traditional English/British concert of "Lessons and Carols". They are mostly French chants de Noël in the modest villages and towns. They are more "classy" when one goes to bigger towns like Périgueux, Bergerac and Sarlat, for instance, where an organ may be here and add instrumental music to the purely vocal efforts. And, of course, there are concerts aplenty when you live in cities like Paris, Lyon, Marseille, Bordeaux, Strasbourg, etc.

In The Village, a choir is born a few years ago under the tutelage of the only music teacher, who taught the piano to the middle-class children, before music classes were created in one of the Market Towns nearby. When she was too old and tired to go on, a British lady took her place as conductor and the choir is prospering. They sing in French, mostly traditional folk songs, a capella.

The Anglican community members who celebrate in a RC church they have been "lent" by the bishop, offer a concert of "Lessons and Carols" on the Third Sunday in Advent, with mince pies and tea and mulled wine afterwards. I have always wanted to go now that we live in the country but it is near Périgueux and my driving skills have been too impaired by health problem for me to drive such a distance without worrying. Perhaps it will be better in the years to come.

When we lived in Paris, there was no true Christmas without the Salvation Army and their music and singing. 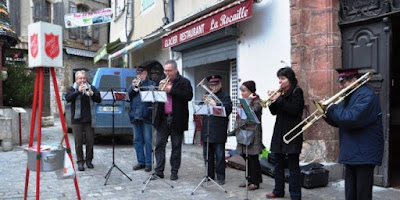 I remember there was always a band in front of Le Bon Marché (this is the model of "The Ladies'Paradise" shop in the Zola eponymous novel), on the Left Bank, not far from home, and where we used to go shopping. Their appearance marked the beginning of Advent, and the special time before Christmas. I was attracted by the tunes and the bell that one member was ringing incessantly as soon as the band stopped playng or the singers singing. And the noise of the money jingling against the metal of the great basin held in the middle of a tripod. One could find other bands elsewhere in Paris but I considered this particular as the best and almost "ours" - probably because it was close to home.

We have always been a musical and vocal family with various success. Mother sang almost flat. When young, she had been curiously chosen for this "quality" to sing alto in the church choir. They thought she was able to produce such disharmonies that she was a right person to perform the sometimes difficult and quaint alto part. Father was barytone verging to bass. He always lots of success with us when he sang Bartolo's air of la calunnia  in Il Barbiere di Seviglia. The rest of the family was mostly composed of cracking voices going from child to adult or purely child voices. This produced a motley choir, but we enjoyed singing together: singing in intricate canons or different parts in the car while Father was driving was something we loved, especially if the windows could be opened! 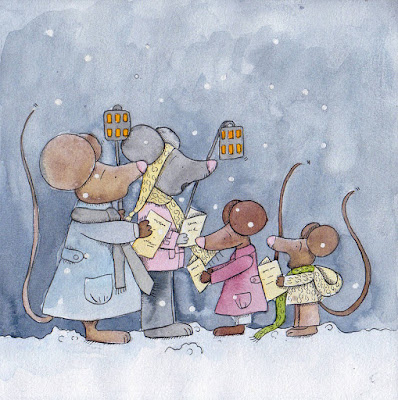 During the time of Advent, CDs were playing French carols that we sang at the same time. Then we listened to the more elaborate English choirs from colleges - Cambridge and Oxford - and Westminster, Saint Paul and other British cathedrals. The Vienna Choir was announcing for us the New Year's Day Concert. They had almost nothing to do with it but they shared the magic name of "Vienna". And Mother had brought back a treasure from one her travels before being married: a LP bought in East Berlin with German Weinacht carols. It was so fragile tht she had recorded it on a tape (yes, there were tapes when she was young!) and made copies of the tape! 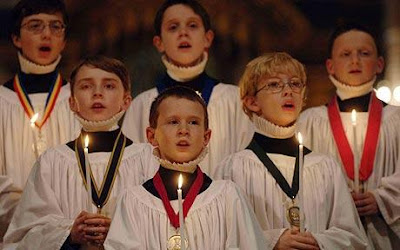 And when we were in France and spending Christmas in the country, there was a "midnight mass" preceded by a vigil to be prepared.

We still had an ageing priest in The Village. On Christmas Eve, he said mass with the bishop at the jail house that had been built near The Village. It is still a big place where people convicted for drug and sexual offences mainly end their time before being released. I was in charge of the singing and there was almost always a prisoner or two who played the guitar. I went down from Paris some week-ends before the fateful date and, uder the supervision of our prist and  chaplain, trained volunteers to sing. They usually mad rather a nice little choir during the Christmas mass. Then the bishop and our priest came to lunch at home. And after lunch, Mother and I went to do the flowers with the volunteer ladies of our tiny village where the vigil would be at nine o'clocj and the midnight mass at nine thirty.

I was not much with the flowers but with the children. We were trying to have the church live again and some children and adolescents were willing to come and do something. Therefore I used to write the vigil and in the midst of the text, there were French Advent carols and lights to see to, flowers to be brought - a whole scenography for adults, adolescents and children. The afternoon of Christmas Eve was the last rehearsal as well as the first rehearsal where we were together! 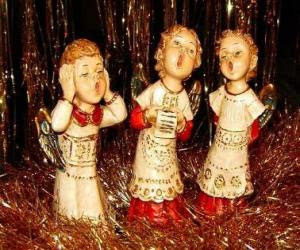 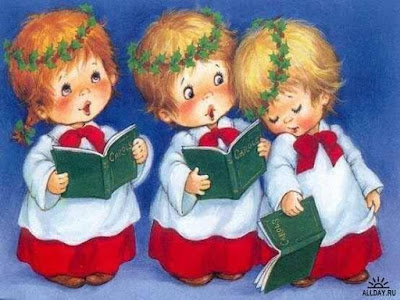 We managed as the years passed by because we got used to. When I was coming from Paris on week-ends before Christmas, I had the rehearsal with the prisoners on the Saturday mornings, and the rehearsals with the little village parish on Saturday afternoons. I left on the Sunday afternoons. It was rather crazy and hurried but I loved it. Once I was ill and could not take the train as usual. So, I made an appointment with the children wo were singing and I conducted some kind of rehearsal on the phone from Paris, with the help of the piano. There were lots of laugh and some work done.

One of my little singers sang so flat that I had to explain that she had a very speial and precious voice that needed to be preserved. She would not sing but help me in the reading and organising of the vigil.

All this does not exist anymore. Our priest is dead as well as the bishop and parishes have been gathered in one big entity. There is one midnight mass at eight o'clock in the nearby Market Town, none in The Village and even less in our tiny little village. Less and less people from The Village and our little village are going. There is a new chaplain for the jail house but no one from the surroundings is admitted: one has to be a qualified and certified jail visitor.

Well, the times they are a-changing! No need to dwell on the pat unless to rejoice at the good and nice and funny memories. At home now, we still have the CDs of carols in French, English and German - and Latin and Italian... And there are still our beloved and very classic Messiah and Weinachtsoratorium.

As to singing, since my little brain accident, I sometimes have difficulties with my voice and The Girls both sing flat. Better for us to listen to the Christmas carols and the angelicchoirs than singing!