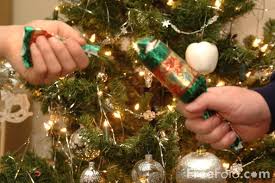 The Girls are feeling better! There is no more fever, temperature is back to normal, and everybody was up for breakfast and to open today Advent Calendar window that showed a Christmas cracker.

This is really not a French tradition: it was even a curiosity until they appeared very shyly in some send-everything-and- anything shops during the last few years. But they are not truly popular as they are in the UK.

We never adopted them during our travels and they were not imported with my craziness about Britain. We had one Christmas with them in England at some friends'. They are nice but there is something about them - I cannot say what - that did not attract us.

One thing alone makes them enjoyable: their paper wrapping. Some are really goegeous and they can make very lovely place settings or centre-of-the-table with the other Christmas ornaments. 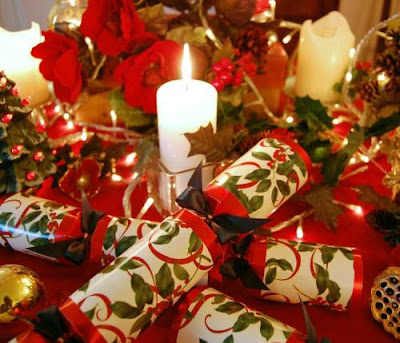 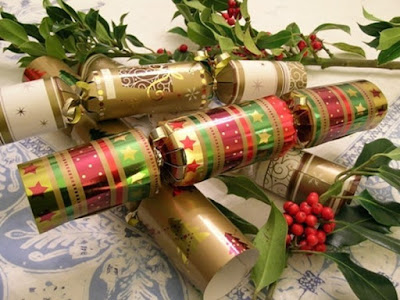 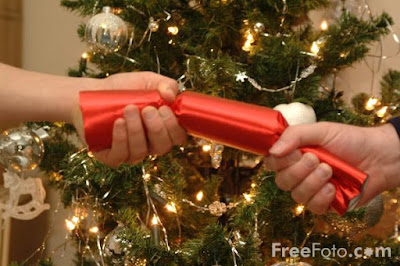 I have discovered lately, in reading a blog, the story of the cracker. Here it is:

Crackers were first made in about 1845-1850 by a London sweet maker called Tom Smith. He had seen the French 'bon bon' sweets (almonds wrapped in pretty paper). He came back to London and tried selling sweets like that in England and also included a small motto or riddle in with the sweet. But they didn't sell very well.
However, one night, while he was sitting in front of his log fire, he became very interested by the sparks and cracks coming from the fire. Suddenly, he thought what a fun idea it would be, if his sweets and toys could be opened with a crack when their fancy wrappers were pulled in half.
Crackers were originally called 'cosaques' and were thought to be named after the 'Cossack' soldiers who had a reputation for riding on their horses and firing guns into the air!
When Tom died, his expanding cracker business was taken over by his three sons, Tom, Walter and Henry. Walter introduced the hats into crackers and he also travelled around the world looking for new ideas for gifts to put in the crackers.
The company built up a big range of 'themed' crackers. There were ones for bachelors and spinsters (single men and women), where the gifts were things like false teeth and wedding rings! There were also crackers for Suffragettes (women who campaigned to get women the vote), war heroes and even Charlie Chaplain! Crackers were also made for special occasions like Coronations. The British Royal Family still has special crackers made for them today!
Very expensive crackers were made such as the 'Millionaire's Crackers' which contained a solid silver box with a piece of gold and silver jewerly inside it!
Cracker manufacturers also made large displays, such as horse drawn carriages and sleighs, for the big shops in London.

The Christmas Crackers that are used today are short cardboard tubes wrapped in colourful paper. There is normally a Cracker next to each plate on the Christmas dinner table. When the crackers are pulled - with a bang! - a colourful party hat, a toy or gift and a festive joke falls out! The party hats look like crowns and it is thought that they symbolise the crowns that might have been worn by the Wise Men. 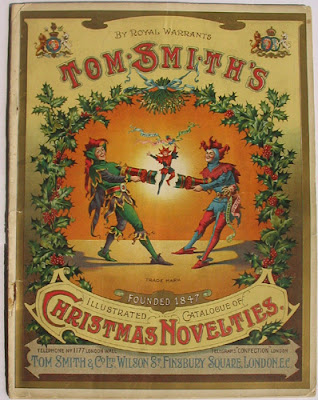 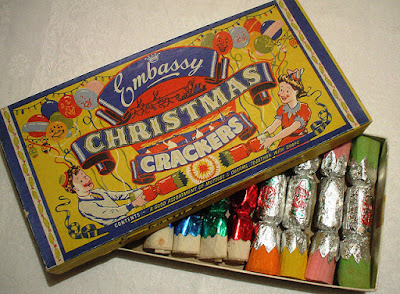 This made me think about Christmas in the Victorian era where most of our European traditions (North- Western Europe and North American) are rooted. And about Dickens once more.

When I first read A Christmas Carol, I did not catch the relation with the ghost stories that are usual in Anglo-Saxon traditions. Since then, I have read Mrs Oliphant's and Edith Wharton's ghost stories, for instance. And I have learnt that Christmas night is reputed being the night during which animals can talk, and when the border between the quick and the dead is the thinnest. These customs relate to the Scandinavian, German, and the Celtic ones. Of course, all have to do with the winter solstice as we have seen with other traditions and myths of this Advent Calendar. Remember the 13th of December and Sankta Lucia? They were brushed with Christianism, and, in the XIXth century, Queen Victoria and, mostly, Albert Prince Consort added a new layer of paint: sentimentality, sugar, and chocolate lid box illustrations and literature. This could be discussed with the emergence of the child as a child and not as an adult-to-be, of the new sense of the family, the improvement of the economic well-being of the rising middle-class, the growth of the cities and the parallel impoverishment of the countryside  folks, of the Biedermeier style imported by the Prince Consort and turned into British sauce, etc. But this would then be an essay and not the story of an Advent Calendar little window.

Nonetheless, these few elements allow us to address Dickens with new eyes and to address his works both on the deep, hidden, sense of it, and with the candid eyes of the common reader (pace Virginia Woolf) and of the child I was when I discovered his short stories and his novels.

The gothic element of the ghost left aside, A Christmas Carol keeps the ghost as a trigger to make Scrooge better, and to show us what is a "good" Victorian Christmas. Crackers are not yet present, but the Christmas dinner is here, both at the Cratchit's and at Scrooge's nephew. The Christmas goose (no turkey) has been baked in the baker's oven, there are festivities and rejoicings in both houses, and we see the difference between the middle-class nephew's house and the more humble Cratchit's home. We may note the use of the disabled child (Little Tim) who will become almost a "must" in Victorian literature. Disabled characters are often used to enhance the sugary sentimentality of the times, even more if they are children. On Christmas only: do not forget what was the real condition of most children during the Victorian era!


The other, more potent memory, I have of Victorian Christmas that partly moulded my own expectations of Christmas, is the Christmas Mr Pickwick spends at Dingley Dell. I know I have already spoken of this but it was really a revelation: the cold outside and the warmth of the hearth and home inside, the revels outdoors and the merry making indoors - these contrasts were striking for the child I was when I first read them (before I read A Christmas Carol) and "prejudiced" me towards a cosy family Christmas. What was surprising for this child, was the absence of Christian references: there was no Christmas service, no God, nothing related to the Christian faith and rituals except for a gentle push towards Christian values that have become humanist values. But a lot did weight in matters of food and eating. The original illustrations of The Papers of Mr Pickwick show victuals hanging from the ceiling and the centre of the house is not "the parlour" but the kitchen in all these stories. 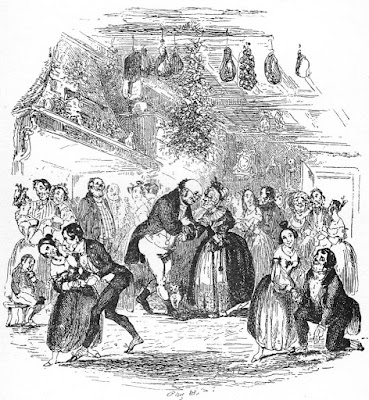 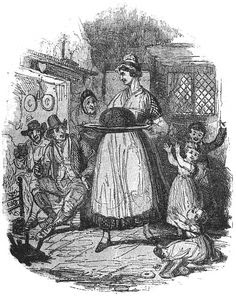 All this rambling is taking us away from the cracker and the little window we opened in the Advent Calendar this morning, and yet, all (including the cracker) were invented in the same period. As is the Christmas card. Alors "Vivent les Victoriens"? Definitely, yes: "Hurray for the Victorians!" 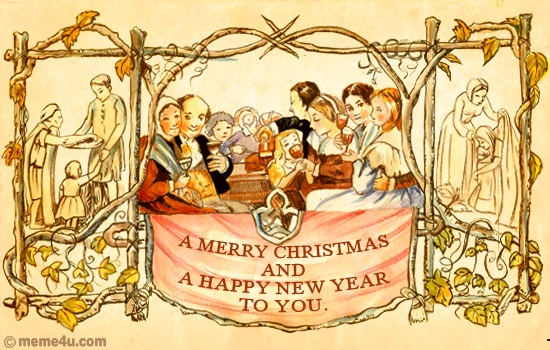 https://youtu.be/W4_GboEjsTM
God Bless Us Everyone performed by Andrea BocelliFrom the album A Christmas Carol
Posted by Unknown at 05:25