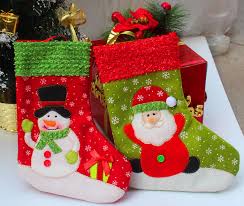 On December, 15th, we found
Christmas socks ready for presents

In fact, my sister is the only one to own a Christmas sock. This is an Anglo-Saxon tradition that we did not fully adopt during our globe trotter years. We remained faithful to the French custom of putting our shoes under the Christmas tree. Why did my sister have a sock then?

At some point of my life, I became quite crazy about everything British. I read books in English (mostly Trollope at the beginning of the craze), I ate British food (bought at Marks and Spencer's in Paris), I tried to find British clothes (at Marks and Spencer's but also at some very expensive shops always in Paris - these were my years with some money!), I lived British, I slept British, I wrote British, I thought British. I was British crazy.

In the midst of my craziness, I dicovered that the Christmas socks I had my eye on were truly expensive. So, always crazy but practical, I bought one pair of ordinary woollen cream socks, threaded needle and wool for embroidery, applied myself to embroider one sock for my sister. I have already mentioned that I have two left-hands and am very awkward. You may imagine that the result was not une oeuvre d'art. There was a star, a sprig of  holly, my sister's name, and a garland going down the leg of the sock until the toe. Lots of colours: gold yellow, bright red, deep green, and variations around these basic colouring. Quite frankly it was a bit of a mess. It was only redeemed by the brightness of the tints and shadings, and the love with which the mess had been done. I cannot say that my sister was impressed and, as all people with Down Syndrome, she did not hide it!

Anyway! The idea did germinate, and the year after I bought the real thing well in advance, during a visit to friends near London, at a very reasonable price, and the replacement sock was received gracefully by my sister on Christmas Eve to be put in use immediately. Since then, she has travelled with her sock and has disdained the French shoes under the tree. As to my pitiful try, it has been mercifully lost. 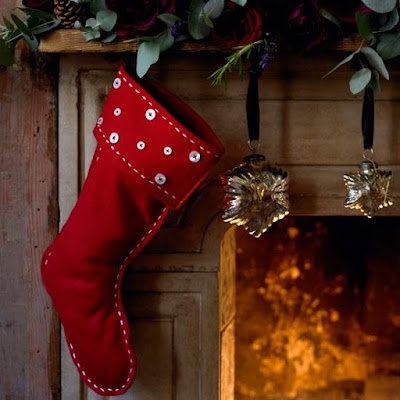 In the Dordogne as in all the countryside, most of the time, people were not rich and it was clogs that were put before the chimney place when coming back from the Midnight Mass. One of the local writers who achieved a national success in the XIXth century, Eugène LeRoy, describes it very well in what is considered as one of his masterpieces, Jacquou le Croquant. The title only would need a long digression to explain the meaning of the name. Let's say shortly that a "croquant" was the scornful way to call a countryman - a peasant - and that a "Jacques" was a rebellious "croquant". "Jacquou" is a diminutive for Jacques (James) in local dialect of the Dordogne. The book is a long painful story of the fight of "Jacquou" and other rebellious peasants against their master, le comte de Nansac. The novel opens with a Christmas scene in which the child Jacquou and his mother go to the Midnight Mass in the chapel of the castle, and come back through  the woods and the coldness of the night. There is a story of broken clog and of clogs let before the chimney place. But do not think that Santa Claus or "Saint Nicolas" will come and are believed in. Jesus is the focus and the parents try to give something to their son. 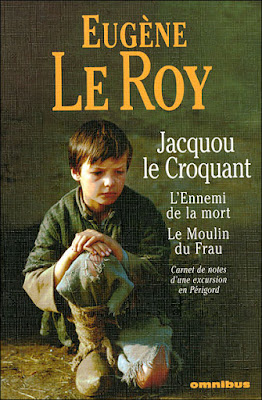 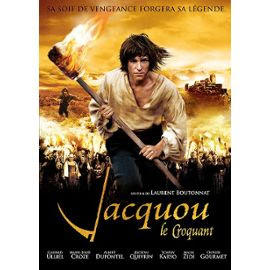 Clogs were worn with thin felt slippers inside well into the 20th century but, in more fortunate families, shoes were left before the chimney place. I have already told that in Father's family the main presents were given on December, 6th, by Saint Nicolas and the parents. In Mother's family, there was no nonsense and the presents were given in celebration of the Nativity by the parents, aunts, uncles, family, and the children. Later, this same attitude was adopted towards us. That was a very good idea as my sister could not be told legends, and then that they were only legends but the truth was different: that would have been too confusing for her.

As there was not always chimney places where we spent our Christmases, we put our shoes under or near the Christmas Tree, and my sister hooked her sock to the arm of a chair or a sofa. 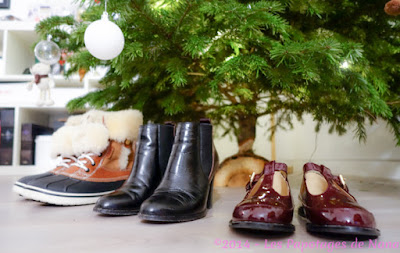 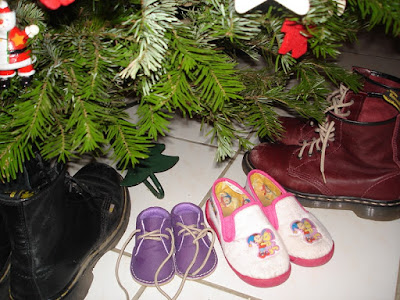 We had one adventure with shoes and Tree in Paris once.

I had made friends with a young priest in my Godmother's parish, which was a parish of intellectuals and quietly living middle-class and upper-middle-class professionals and "ordinary" people, comprising influential politicians. Jean-Marie was from Rwanda, and had survived the genocide as well as the temptation to become a soldier child thanks to a Serbian Franciscan missionary priest, who was killed at the end of the civil war because he helped both Hutus and Tootsies: they were all human beings in his eyes. Jean-Marie told me that his youth was then rather chaotic but that he went to school, to the RC seminary, hesitated about leaving it and decided to stay. He was sent by his bishop to France to learn and gain a doctorate in philosophy. He was doing pastoral work in Godmother's parish and learning for a master in economy on the side. He was, and still is, brilliant. And humble.

Came Christmas. I realised that none of the well-thinking parishioners was going to invite him, that his fellow priests were going to their families or friends, and therefore that he would be alone on Christmas Day after the last service.

I asked Mother if he could spend the day with us and invited him.

We went  to Midnight Mass in his parish, spent the evening after the service  half with him and half among ourselves. But when I was at home, I realised that I had not told him to bring his shoe to put under the Chrismas Tree as we had little presents for him. So I rung him up before he could have been asleep and told him about his shoe. He seemed puzzled. I insisted. He seemed more puzzled. I insisted even more until he said, half jokingly, and half desperately: "Camille, I know I come from Africa and a poor country but I have shoes, not ONE shoe but SHOES. I have at least one pair of shoes that I shall wear to come to you, and a pair of trainers. But why do you want me to do with ONE shoe? Do you think I cannot buy a pair or that I walk bare-footed?" I felt like a fool and explained it was a French tradition for Christmas - among others. And he retorted: "But am I not to come for lunch and spend part of the afternoon? What are you going to do?" "Nothing very special, and you will have lunch, but if you want to participate in a French Christmas, then bring your guitar with you."

He arrived after the last morning mass, and was surprised by the Christmas fir tree. We told him to put his shoe under it, and to wait. Then my sister came in with heavy treads, a plastic bag on her shoulder, trying to mimick an old man. She has the red cloth cap of Santa on her head and was saying: "Je suis le Père Noël. Poum, poum, poum. Laissez-moi passer. Je suis le Père Noël". She put the little presents on the shoe and did not forget to add the nuts and the orange IN the shoe. 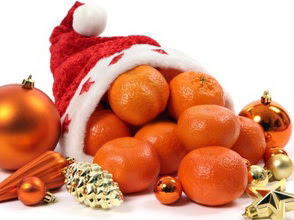 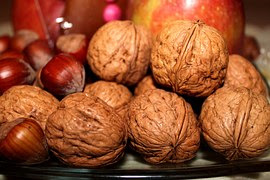 We had to explain all items. He was listening to us carefully and looking at everything with curiosity and surprise bordering to wonderment. After a while, he simply said: "I have never had a Christmas. In my family, we go to mass and then it is a day like any other day. There are no presents and no special food. You, Europeans, cannot understand what our cooking can be, and that our traditons are still mingled with Christianism or your mythology." He was shaking his head in disbelief.

We had our Christmas lunch, and some music in the afternoon. He played the guitar. We sung. It was cosy at home and grey outside. We  learnt about Christmas in Rwanda, about his life - what he wanted to say. We were joined by more friends - one with a violin. They improvised a duet violin and guitar. We spoke more and it was time for him to leave well before we thought it was the right time. We were sorry the day was ended.

Later in the evening, when we were putting out the light, we saw that my sister's sock was firmly hooked to the arm of a chair and that Jean-Marie's shoe was still under the Tree. 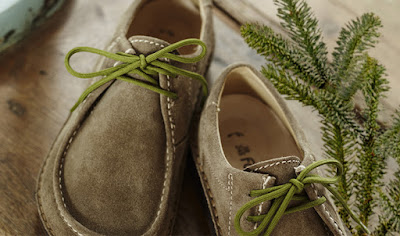 Dangling sock or waiting shoe,
I am grateful we live in a country (almost) at peace
and in comfort