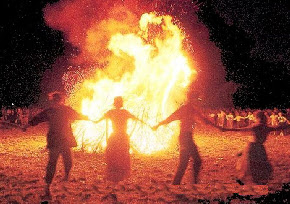 Last Saturday, I was looking through my e-mail box when I found the parish news with a special annoucement.

There is no Parish Magazine in the village. The village is not even a parish in itself anymore. Of course, being of Roman Catholic culture, each village in France, even the smallest one, has a RC church even when the Protestants have fought and won the majority of the population in centuries past. However, as everywhere in the Western world, less and less people go to church, less and less people consider themselves Roman Catholics, less and less people consider themselves Christians and one is considered either slightly backward or devout fanatic when one is neither atheist or agnostic. In fact, one has to be either a Jew or a Muslim to proclaim one's religion - at one's own risks...

No church-goers, no priests. No priests, no individual villages with individual parishes. These are gathered in large entities called "parishes" as well. Our village is part of one of these entities and the parish includes no less than around fifteen or twenty villages and churches, which cover a large area. As there are not enough priests, the diocese has concluded an agreement with an order of monks who form little congregations in former disused abbeys. And the monks serve the villages forming the large new parish.

This is an awkward understanding and disposition.

Of course, rectories or vicarages are empty, like ours. 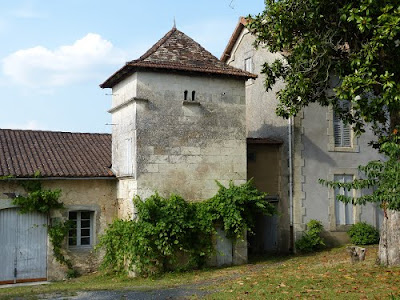 And the rectories were almost at the heart of the villages, near the churches, like ours again. 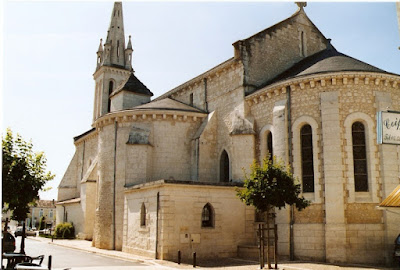 Our former old vicar was a pittoresque to be seen opening the doors of the church every day, crossing la place, the main square, to go and buy his bread at the baker's, or shopping at the shops' and not at the supermarket, gardening his plot of land around le presbytère, the vicarage, or sat at his desk, the presbytère door wide open to all and sundry.

He was a character. Born of Italian parents in Northern Italy, in a village of the Dolomites, come to France at the age of ten months when his father migrated with the whole family to find work in the coal mines of Lorraine, in the East of France; treated as migrants; his father slowly falling ill to the breathing illness of miners; uprooted again to be farmers in the South of Dordogne where the mine's owner had farms; his father given another job both by "Christian charity" and voting purposes as the mine owners were from a political family searching people support to be elected; being selected by the priest of his parish as a clever boy and sent to study at the petit séminaire, the minor seminary in Bergerac; being ill himself and having to stay in bed for a year; going back to the seminary and deciding that he would be priest by intense faith and calling. He was gruff. He could be unpleasant. He could be as soft as the wing of a dove. He was loving and caring. He did not show his feelings. He hunted for the sake of walking at dawn and watching nature awaking. He frightened his parishioners and his non parishioners and all the children. He was loved by his parishioners and his non parishioners and all the children - and all were proud of his oddities. He would love philosophy and theology, his computer and internet, music, football, Italy, his family, his friends, painting, sculpting, his patch of potatoes and tomatoes, a plate of pasta bolognese, and quarelling with his best liked parishioners. He was sure and upstanding in his faith, meek, irritable, generous, straighforward, frank, an accumulation of contradictions. He was human.

He died one morning at dawn, in his beloved Dolomites, while he was on holidays in Italy, visiting his cousins. He died on a mountain path, alone in the dew, on an August morning. He left no public image of himself.

Nowadays, one monk comes each Sunday morning and each Tuesday morning for mass, and goes back to his abbey or the centre of activities of the parish, which is the next village ten kilometres away. This is not far away. But a seeping feeling is growing of secularity and death of Christian culture which are seen through little things like the continuing death of the heart of the village. The vicarage and the church are empty shells at the core of an emptying bigger shell. And new activities are being born around the supermarket.

Paradox. In all this secularisation, the monks have revived one thing: le feu de la Saint-Jean, the bonfire of the feast of Saint-John-the-Baptist! 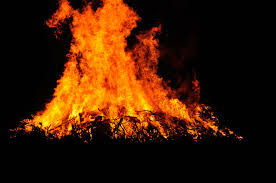 In their desire to create something that would take back young people and children with their parents to church, they have ironically revived the old Midsummer pagan festivities that had been progressively forgotten during the last cntury! (https://en.wikipedia.org/wiki/Midsummer)

Therefore the announcement in the parish leaflet I found in my mail box, inviting all people to come and share a picnic, and then music, dance and leaping over the bonfire on the 24th June - not on the Saint-John's Eve... (https://en.wikipedia.org/wiki/St_John%27s_Eve)

Who says that religions are dangerous? They are, certainly they are. They are also on the long run but a veneer. Long live traditions! 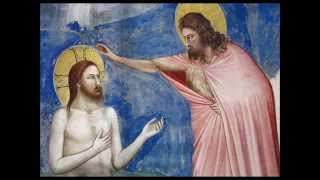