Texts belong as much to the reader as to the author 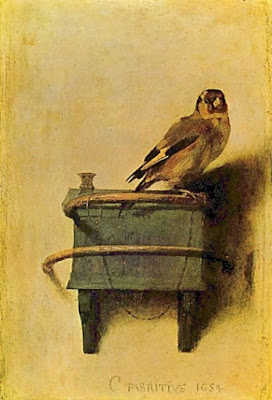 In a previous entry, "No challenge for the Provincial Lady" (http://camilledefleurville.blogspot.fr/2015/06/no-challenge-for-new-provincial-lady.html), I talked among other books about "The Goldfinch" by Donna Tartt, that I had read in French as "Le Chardonneret".

I am afraid my comment was not entirely positive. There it went:

"So, I grabbed "The Goldfinch" by Donna Tartt because it was close and handy (paperback) while heavy and full of promises of a universe of its own between its front and back covers, being so big - a page turner? -, and because I dimly thought it spoke of Flemish painting, and nothing seemed better appropriate in this calm than the calm of Flemish masters. [...]
I have read a page turner, as a page turner it is, full of more or less veiled allusions to Pip and Estella, David Copperfield, Charles Dickens, Fyodor Dostoevsky, to memories of Henry James, to the glare and blare of the USA, to the deserts of Nevada, the wilderness and sophistication of different New-York Cities, to the Russian-Ukrainian mafia, to the traffic of "oeuvres d'art", to the American middle-class whose dreams seem broken, to the lower shallows where drugs and adulterated alcohol are more usual than sleep and food, to the heights to the upper class where money is far from being the only criterion to be a member of the "caste"...

A dancing, stunning, rich, full and replete book where the loose threads of the beginning get woven together little by little to be rounded off at the end. A compelling book that went with me in the early morning, the lazy hours around tea in the afternoon, and at night when I could not sleep. But a book that left me with a hangover and a pasty taste in the mouth: why pseudo-philosophical comments as a final touch? The braid that had been woven seemed to be over-weighty and contrived by a useless load of "morale", as these fables that always carry a "preach" and lesson.
But a "tour de force"."

Since then, I have talked with friends and read the blog of some one I do respect as literary competence are involved.

The first friend with whom I talked is American. He told me that this book was among his five top ten readings of last years and he thought highly of it. As he is not very talkative about description of his feelings, I had to be let with this cryptic statement but I knew he meant it because my friend is eminently truthful. I know as well that he knows the desert of Nevada and the life in New-York City and has travelled to The Netherlands. He is a keen connoiseur of paintings and the arts. He is receptive to atmospheres. He knows about the problems of youngsters smoking, smoking drugs, and drinking. He knows the "Bohemian" side of the Village well and the upper-classes of NYC as well. He has read and reads a lot and was appreciative of Harry Potter. Lots of assets to make a clever reading of "The Goldfinch".

My second friend is Russian and deely in love with English literature. She underlined the relationship with Cherles Dickens, with the Bildungsroman and "David Copperfield" and mentioned Pip and Estella - the latter split between Kitsey and Pippa. But of course, she insisted upon the links with Dostoyevsky - "The Gambler" of course, "The Idiot", "The Brothers Karamazov" - and I saw the point as with philosophy and reflexion upon arts and the "oeuvre d'art" at the end of the novel, the last pages of Dona Tartt's novel. My Russian friend is a pianist and senses things I tend to let aside.

The third opinion came through an exchange with a university professor of literature specialised in Henry James. She was reading "The Goldfinch" as one drinks water in small sips when one is thirsty. She enjoyed her reading and used the techniques she knows about close reading, reading against the grain, making notes, comparing with other sources and critics - or so I imagine. And she gave us her comments in a blog entry this morning: https://pigeonfiles.wordpress.com/2015/06/22/donna-tartts-the-goldfinch-the-imagination-of-disaster/.

I am definitely defeated. What I thought and felt as heavy lesson in the last pages of the novel, my two friends and the lady blogger qualify as a gem.

What is wrong about me? I have re-read those few pages and still find them as heavy as a 17th century sermon and as demonstrative, without any of the lightness of touch and gauzy approach I prefer. I feel a lesson is given to me and I have no option but to learn it. As a fractious child, I tend to rebel and would have preferred to be incited to consider it and to make an opinion by myself. But the majority is against me. I must me wrong. Mea culpa, mea maxima culpa.

What my American friend has told recently comforts me a little: a text belongs as much to the reader as to its author. I will add: and each reader is free to own the text his or her own way, if he/she does not misrepresent it!

Meanwhile has already such a wee slip of a bird had so much interest focused on him? 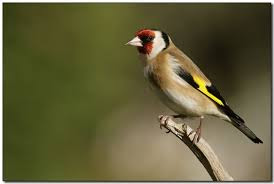