On the second day of Christmas 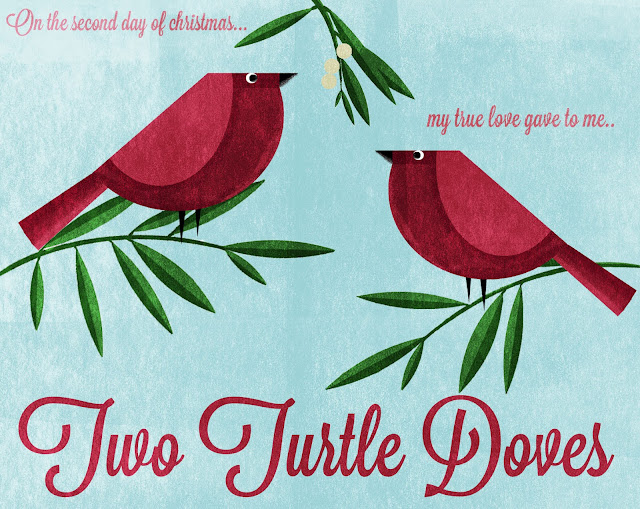 On the second day of Christmas,
my true love gave me
Two Turtle Doves
and
A Partridge in a Pear Tree

On the 27th of December, there were still pear trees in the orchard but no partridge and the turtle doves had long migrated for greener pastures or bluer skies. They were (and still are) a pain during the summer time: they seem to weep for each other from morning until night and it is a small blessing when they go away. I know: I am being unfair, sarcastic and, most of all, show a total lack of romantic feeling.

Our family has never been demonstrative and there have never been turtle doves to be found in dark corners of rooms, or on the stairs, or in the garden. There were hugs; there are still hugs for those who need them or ask for them but affectionate gestures are not our forte - which is sometimes a disappointment.

The 27th of December is the Feast of Saint John the Evangelist and of Father, "his namesake". Therefore the day started with greetings, cards, little presents, and a breakfast as served only on Sundays and feast days: fruit juice, croissants and brioches, marmelade, coffee and tea.

Then we prepared ourselves for our traditional visit to Great-Aunt Lucy as it was her birthday. I have told you of Great-Aunt Lucy in a previous entry, on December, 13th, for the Swedish Sankta Lucia (http://camilledefleurville.blogspot.fr/2015/12/on-december-13th-and-third-sunday-in.html) - my poor Great-Aunt born as "an accident" in 1917, christened Lucie-Marie-Noëlie, having birthday, feast day and Christmas almost roled in one, and to whom we sended little Sankta Lucia objects when we lived in Sweden. 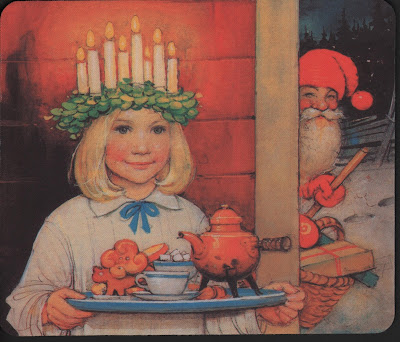 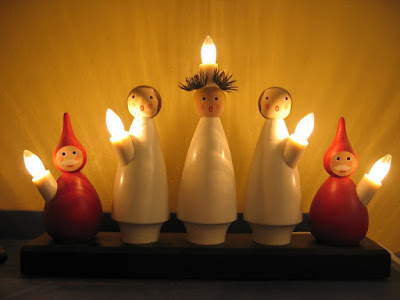 The 27th of December started the long string of visits to relatives that we would make before Epiphany or, at least, in between Christmas Day and New Year's Day. Visits would go on after Epiphany with or without us, to further relatives, friends, acquaintances, until the last person we knew would have been visited at least by Mother, more likely by Mother accompanied by my sister and me. But for the closest family, relatives, etc., the full family was required, including Father.

Starting with "Aunt Sweet", my name for Great-Aunt Lucy since the day she had given me a sweet - something almost forbidden at home.

We would stack into two cars, Father driving one with Mother, my sister, my disabled brother and his folding wheelchair, and me, brothers in another car - not wishing to know how their stacking was made! - and we would drive the dozen kilometres or so that separated us from Great-Grand-Mother's house where she was living with Aunt Sweet. Of course, even if our arrival was awaited and ritual, Mother would have rung up in the morning to ask what time would be convenient. That way, we never bumped into other guests: that would have been too much for the two ladies.

It seems that we always arrived in a flurry of scarves and gloves and coats. But there were surely winters with rain or as mild as the present one. Anyway, all superfluous garments were left in the great hallway. There were not so superfluous really. Having been born during a world  war and lived through a second, Aunt Sweet was parcimonious (which had made her gift of a sweet so striking) and believed in Spartan education and a sparsity of commodities, including fuel and heat. We had to move in this great barn of a house or to drink something piping hot in great quantity to keep warm. But one was prohibited. We had to sit down and make conversation when asked to.

This drawback was cancelled as we had to stand in Great-Grand-Mother's bedroom. She was bedridden in her last years and I was afraid of her, so shrinked and wrinkled she was in her big bed. But the bedroom was the only fully heated room of the whole house. Aunt Sweet was ravenously devoted to her mother. She had had to sacrifice her own private life for her and in her mother's great age, she was taking some sort of revenge by keeping her mainly for herself. Great-Grand-Mother received all possible care and attentions but she was stuck in her bed and had to ask almost everything to her daughter. As I grew up, I became fascinated by this all wrapping love that was also a prison for both of them. Younger, I used to think we were permitted to enter the real story of Little Red Riding Hood. But I never could decide who was the Woolf and who was Little Red Riding Hood. 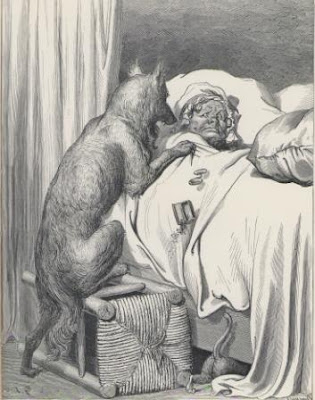 There was a tree in a corner of the room with the presents under it. We were called one by one and given our gift rather ceremoniously. Aunt Sweet's presents were varied and unequal. We never knew what there would be in the boxes. Some years they were real treats, others, they were odd, and rather catastrophic in our point of view. I remember that once, my sister and  I received very lovely white cashmere berets, scarves and gloves that we had to wear to go to school and that turned a disaster because they were grey and muddy in no time. The preceding year, we had had white fur "toques" and collars to adapt to our coats with a little muff with a string to pass around our necks and white gloves. That was for special outings and Sundays. There were glorious years where we had little cane chairs with cushions, and the famous small cardboard suitcases with handmade clothes for the dolls we had received in the "mended crates" that were craddles.

But the most "magnificent" Christmas was when we all received bathrobes. Aunt Sweet had bought two rolls of terry cloth: one for girls (pink flowers on white) and one for boys (blue flowers on white), and had asked her seamstress to turn that into ... mantles (yes, I suppose you might call the so) with a blue ribbon for the boys and a pink one for the girls) at the collars, to close them very prudishly. We looked ridiculous. The boys mostly - when you think that some were already in their first years at university... They wore them when they had to - at home - half as a Roman toga and half as Zorro's or conspirators' capes. Mother loved them for the youngest of us - therefore for my sister and me - because we were well wrapped when we went out of the bath. And I must confess that, though ridiculous, they were very comfortable and very useful. But we would never have said so!

After the presents and our more or less fake exclamations of delight, tea was brought in. And then, we felt like Royalty! 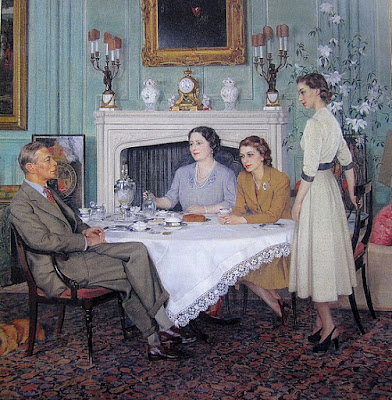 Aunt Sweet had a maid who had stayed from better and older time. She would put a snowy embroidered white cloth over a table in the corner of the room, near the tree, and bring a small spirit lamp over which was the kettle, then the teapot with warm water inside and a basin to slop the water, some more water to reheat, milk in a miniature pitcher, its brother for hot water to add to the tea would it be found too strong, a sugar basin, plates with a sliced tea loaf to be toasted, cakes, little sandwiches, a fruit cake, butter and marmalade, cups and saucers with chinese characters on them. The china was so thin that the cups were translucent and we could see the tea through it. The youngest of us had stronger crockery with hot chocolate in a special chocolate container.

I felt I was diving in a book but I never was able to know which. It could not be the homely Dickens. It could not be Louisa May Alcott. It might have been Proust but when younger, I had to rely upon Mother's descriptions of her own young days or Grand-Mother's young days when there were still maids and the tea ceremony.

This is when my sister, as the youngest, gave Aunt Sweet her birthday present. And Great-Uncle Mark with his wife, Great-Aunt Elisa, made their entrance. We were hugged and relieved from almost all conversation, except for the eldest ones but they knew how to deal with that. We, the youngest, might be together and whispered quietly to each others. I was fascinated by three things: Great-Grand-Mother stting upright in her bed (well, as upright as she could) and drinking tea with the help of the maid, Great-Aunt Elisa's long teeth that made her look like a horse with garnet earrings (I loved the word "garnet"), and Aunt Sweet's two warts, one with three straight hair darting towards us.

Great-Uncle Mark was Aunt Sweet's brother and her idol. He could monopolize the conversation for hours on end. Aunt Sweet would listen to him with adoring eyes and sometimes an unexpected  tart comment. Great-Aunt Eliza talked in a quiet voice with Mother about her daughter, Aunt Laura who had two sons with the same degenerative muscular illness as my brother. Father went over to Great-Grand-Mother and spoke with her in a clear voice as she was partly deaf. The talk was not entirely coherent as she lived mostly in her own world and measured over times in terms of her youth.

Then the maid would close the shutters and draw the curtains over the sunking sun. There was a lull in the small talk that had taken place. Father would wander back to the tea table and look at Mother who would smile her thanks, gather her bag and gloves. We would all be blinking as if we were leaving a gentle world of sleep and dream to go back to reality. And we would say our good-byes and thanks. 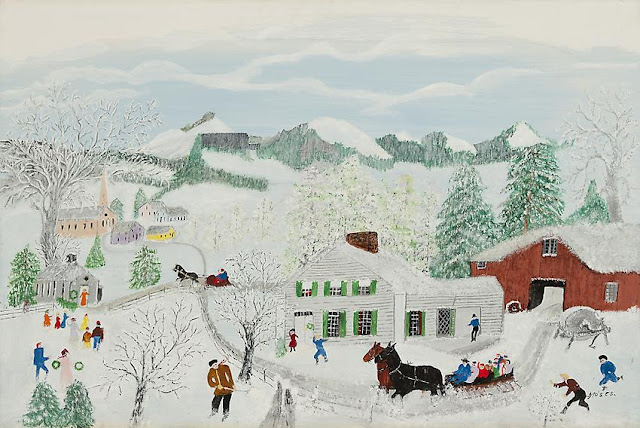 Time to leave. Time left and over nowadays. It has been a privilege to live it even if I did not realise it then. I declared that it was part of "the enchanted week" between Christmas and NewYear's Day. And it really was. Of course, it was part of another world. I thought it was normal and would last forever. But what and who remains from that time? The younger generation only. I am not sure they remember and I am often told I dwell too much on the past. It is true but the past has to be remembered. It is made sweetest and softest by our memories but it was as harsh as our days. It was ... different. Nevertheless life was as difficult as life today. Perhaps I need it because I need roots. Can people truly live rootless? Perhaps. Even in my family. But I see sadness and no deep contentment in the rootless today as I see nostalgia and sometimes sadness in my rooted life. One cannot escape the past and one cannot escape the present. The whole issue is to find oneself in media res.

On the second day of Christmas,
my true love gave me
Two Turtle Doves
and
A Partridge in a Pear Tree