On the fourth day of Christmas 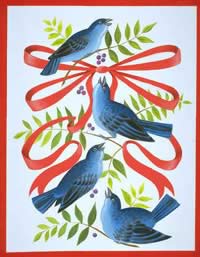 On the fourth day of Christmas,
my true love gave me
Four Calling Birds
and
Three French Hens
and
Two Turtle Doves
and
A Partridge in a Pear Tree

Except that "calling birds" is a mispronunciation of the old word "Colly birds", which meant blackbirds. And therefore, the illustration should be: 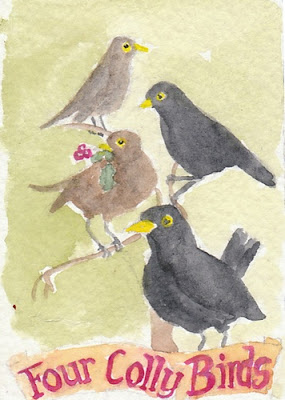 Black birds are out of season here. We shall see them again, very shyly in March and in full assurance of courtship in April. But the winter season leaves us mainly with Mr Robin and the blue and black tits. In the evenings, I hear owls hooting. This is not a frightening noise but a haunting one. The night noises are full of swishes, shrieks, whisperings, and rustlings, Sometimes, a cat meows loudly on the terrace before the closed French windows. Sometimes, these are the answering calls of a fox and its vixen. Country life has nothing of the niceness and anthropomorphism of "Brambley Hedge" and Beatrix Potter's tales or of "Winnie the Pooh" and "The Wind In the Willow". Life in the country is bloody and savage. It is a constant fight between the animals, between men and nature, between men and the animals. I think we, human beings, made it idyllic when we left touch with it and began living in towns and cities - and had pets. Reality is starker.

While I was re-reading my two posts about the second and the third day of Christmas yesterday, I saw how idyllic they may appear to readers. I was a child then and time seemed to expand infinitely before me. How long did these Christmases last? A handful of years certainly.

The people around me were old and I remember the year when Great-Grand-Mother, Great-Uncles and Great-Aunts died one after the other as by an epidemy. We had to come back from sumer holidays at Father's parents in the East of France to be in time for Great-Grand-Mother's funeral. We had to come back from the country where we lived, on short leaves for other funerals. That year, it seemed that Mother had a uniform of black or dull colours.

And during all this time, there was my sister growing up slowly, very slowly, like a hot house flower. First, she gained strength and could sit, then she crawled, then she made a tentative pace. She warbled to herself in her own language. She had to learn everything that made her a human being: to eat, to stand up, to speak, to walk. One victory upon another. And such work.

And what about the others? The other children were older. They remembered a time when they lived in a "normal" family with no disabled brother and sister. They were studying, they were going to high school an to university. I was the one in between my physically disabled brother and my mentally disabled sister - and I was THE girl of the family. I did my best to help but I soon seeked refuge in my own world. The extended family with all the older characters was the testimony that things may stand still and that one may weave a protective cocoon of affection and well-being.

This is wrong. Nature is red in teeth and claws with the blood of mankind.

I was happy being the "Innocent", a little lost, a little apart. Well, I was happy most of the time, not all the time. I lost myself in books and stories. I had imaginary friends. I was travelling on a schooner in summer time and I was drawing boat plans during winter time. I was writing about Scotland where I was chieftain during the times of Bonnie Prince Charlie. I was living with the heroes of Dumas and Verne, conquering new worlds or saving kings. In real life, I had a muff and gloves, and knew how to curtsey and smile; in my true inner life, I was a tomboy.

It was probably slightly schizophrenic but I did not suffer from it. It was a way to live through difficult things and times.

Meanwhile, on the fourth day of Christmas, we had a day without visits to make. It was the day where Mother and Father were at home and received nephews and nieces with their children. We only had to be polite and say "how do you do?" and then we could disappear and  read or play or do whatever pleased us as long as it was not too noisy.

A good book, a pencil and a ream of paper were all that I needed!

On the fourth day of Christmas,
my true love gave me
Four Calling Birds
and
Three French Hens
and
Two Turtle Doves
and
A Partridge in a Pear Tree