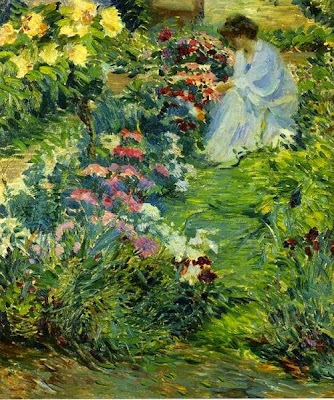 Sunday mornings are my favourite time when I drive to the village to buy fresh bread (banettes) and croissants and, sometimes, some pastry for dessert. There is also the occasional magazine as I park the car just in front of the newsagent's / bookshop door and my eye is caught by a picture or a title that would please "my girls".

I go early, in between eight and nine o'clock. I shop as fast as possible - which is not easy as everybody knows everybody and it would not do not to say "good morning" to all, adding a comment about the weather and our mutual health.

When I leave the "bourg" (the centre of the village with the church in the middle of it), I then relax and take time, going home by back lanes and not the direct road. This is when I see the differences, so quick to come from one week to another.

We have had sunshine almost all Sundays, sprinkled with the occasional April shower. Therefore, there has always been dew on the blades of grass on the roadsides. 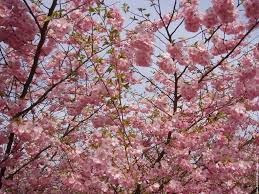 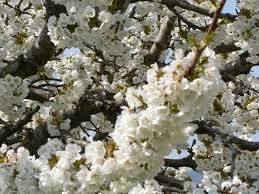 In mid- April, there were buds tightly folded on every tree, except on the cherry trees dressed in white and the "prunus trees" in vivid pink.That Sunday was a typical April day when the weather does not know its mind and hesitates between showers, pale sun, chilly wind and gentle heat. The grass was grown and growing still.
The other trees were hazed in various shades of green going from pale yellow to russet, from young green to bronze. And, at home, the wisteria was tightly folded in silver buds tinged of purple.


From this Sunday onwards, it has been a cascading rush into May bloom. No more reticence but the candle-like bunches of lilac have opened small white, pale and deep purple flowers as well as apple trees, white hemmed with rosy blushing pink, and the wisteria a riot of purplish blue running down from the height of the cherry tree it has invaded. It has been a clouded scent of honey as soon as the sun and the heat showed more. Blackbirds hopping everywhere and birds twittering. 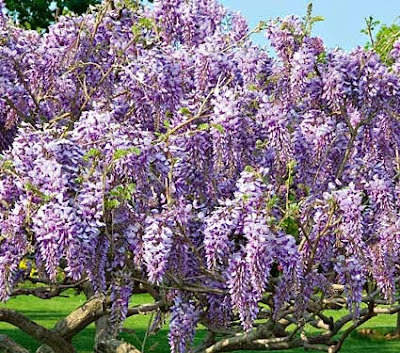 Now, this splendour has gone but there are buttercups and cow parsley and Queen Anne's lace in the ditches, irises in marching order, straight on their stalks, from light washed sky blue to deep ink blue, from bright yellow to golden brown. And underneath all the pulses of germination and pushing up of the earth for grown seeds to see the sun and the sky. A primeval force that comes back every year.

I think of Faulkner line in "Absalom, Absalom!": "It was a summer of wisteria". I think - who knows why? - of Anthony à Wood and Oliver Goldsmith, of Parson Woodforde and Francis Kilvert, and closer to us of "Word from Wormingford".by Ronald Blythe. I think of Colette and her love for nature, her felicity with the words to convey her feelings.

I go to the bookshelves in the library and pick up Faulkner's novel.

“It was a summer of wisteria. The twilight was full of it and the smell of his father’s cigar as they sat on the front gallery after supper until it would be time for Quentin to start, while in the deep shaggy lawn below the veranda the fireflies blew and drifted in soft random- the odor, the scent, which five months later Mr. Compson’s letter would carry up from Mississippi and over the long iron New England show and into Quentin’s sitting room at Harvard.”

Nothing of MY spring in it and nonetheless it always comes first to my mind when I see or smell the odour of wisteria, that means Spring to me. Words have a heady scent, different for each of us, but a heady scent that we share and relate to different things. What is wisteria for you? What is wisteria for me? What does the word call to our minds? Which images? Which senses come to life - keener than usual?

This was April. The days, like water, have glided into each other. And from this long, long, day that made a month, I awake, faint with too many colours, too many scents, too much beauty - head spinning, happy, ready for another heady month and another, and so until the first frosts of November and the other celebrations of the Earth when she goes to rest. This was April. 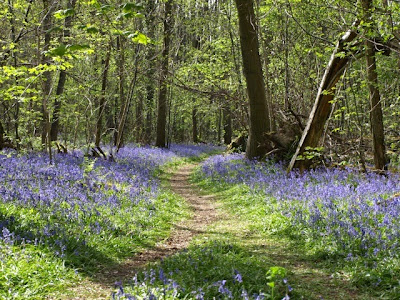 Email ThisBlogThis!Share to TwitterShare to FacebookShare to Pinterest
Labels: o see the sun