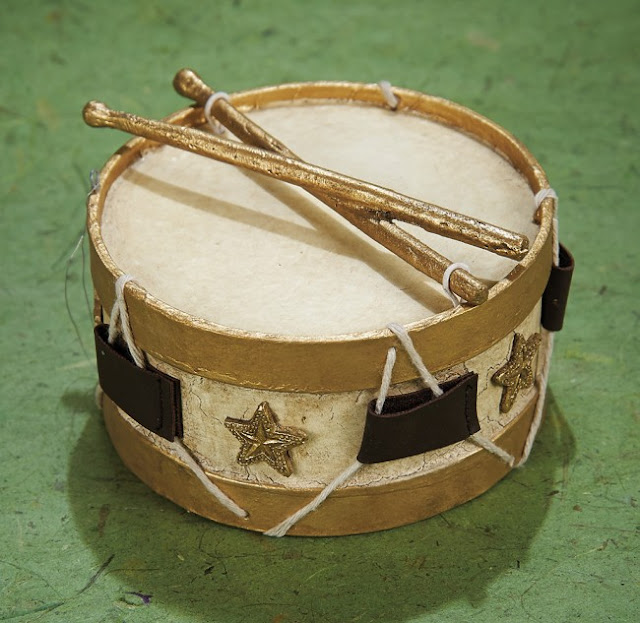 On December, 5th, we have a déception!

The Girls and I open the daily window of our Advent calendar (the big one on the sideboard in the dining room) after breakfast, when we are still in our dressing gowns, before the splashing of showers. It is a moment of expectation: we are all three "glutinées", which the distortion of the word "agglutinées" (clumped) used by my elder Girl, like a swarm of bees, buzzing and trying not to tear the frail leaf of paper that will reveal the drawing of the day. Then, come the comments. And today, they were of disappointment.

All right. A drum is a toy, mostly used by boys - mostly, because girls love to make noise as well - but it is a silly toy for our tastes.

We have never been deprived of  noisy toys and we have had noisy romps, when we were not living in flats where neighbours might have complained. But the drums have always been limited to the house in the country and have never been favourites.

They were toys found in the attic, left by grand-fathers and uncles. My brothers would take one and beat it as loudly as they could for a while and then put it back without regret. 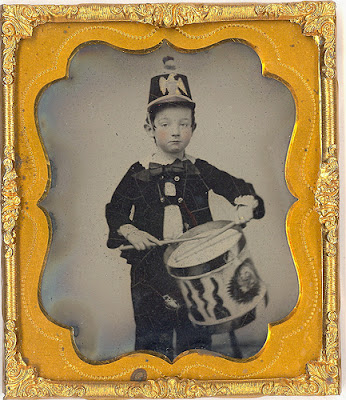 There were photographs in the albums of these grand-fathers and uncles dressed in full uniforms of little soldiers. These were the times when Napoleon (the First, the Great, not the nephew, the Third) was not so far in memories, and when France was seeking revenge, when the Republic was established (after Napoleon the Third, the nephew was defeated), and we had lost l'Alsace et la Lorraine to Prussia. Mother's family was never very vindictive: the uniforms and the drums were left to the children.

There was one time when my brothers, my cousins (and I) put the old drums to their full use. That was during the holidays, on July, the 14th, for the Fête Nationale. We paraded at night, drums first, then the crowd with lanterns and national flags, singing, La Marseillaise, L'Interationale, and L'Ave Maria de Lourdes, which shows that we liked singing, had ecclectic tastes, and were open to all ideas, philosophies and religions... Our parents, uncles, aunts, and family gathered on the terrace and applauded almost as noisily as the drums - which shows a great tolerance for our demonstration, unequal voices, and for or ecclectic tastes, etc. 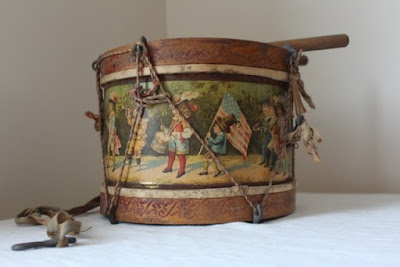 Mother did something very naughty one Christmas. We were invited for tea, during the week between Christmas Day and New Year's Day, at one of her nephew's, whose wife was grating upon her nerves. She was perfect. Her studies has been perfect (but I heard Mother say snobbishly that her level was far, far inferior to ours - and that was the first and only time that I heard Mother said something snobbishly!). Her house was perfect. Her clothes were perfect. Her cooking was perfect. Her children was perfect. Mother said again that her niece-by-law was a perfect ape who was able to imitate the real thing but was NOT the real thing at all. She spent most of her visits with the niece's mother who was parked in a corner, not to be seen too much and not to talk at all since she had not left her inflections from the Dordogne speech, while her daughter was ascending like the lark.

Therefore the elder son was perfect. An angel. Blond - to turn mousy later. Curly - baby curls. Blue eyes - no, unfortunately brwn eyes. Perfectly dressed with Tartine et Chocolat clothes. We almost saw the wings fluttering in his back. Quiet and smiling. Sat on a low chair at Mother's feet, looking up at her as a puppy asking for his bone. 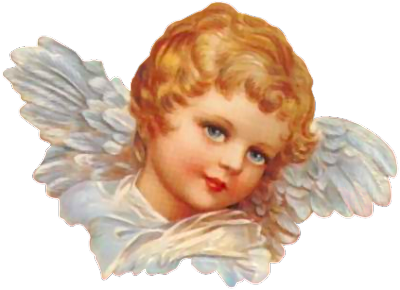 Mother did not make him wait long. She bent to him, stroke his hair, smiled sweetly, and handed him a big box wrapped in gaudy paper with a big bow, and wished him a Merry Christmas. The boy threw himself ravenously upon the box, forgetting his mother's objurgations to thank Mother, flew the bow on piano, tore the paper, tore the cardboard box open, and roared with uncontrollable joy and mirth when seeing ... a drum!

He knew instinctively how to fling the strap around his neck, took the drumsticks in his chubby hands and started to play.

His grand-mother awoke in her corner and laughed. His mother was divided into politeness and deference towards Mother and the urge to wring her neck. She did not know how to hush her cherubim and thank her aunt-by-law. Mother looked angelic. It was a perfect pandemonium all the time we stayed. We took tea, smiling at the little soldier. Mother chatted and could not be heard for all the noise there was. She was gracious and smiling, inviting her niece to be as gracious and smiling, while we were able to see a black cloud gathering over her brow. We left, thanking for a perfect afternoon. The drum was heard from the garden and even when we were in the car. 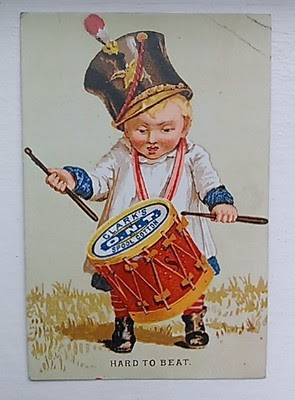 When we arrived at home, Mother said to Father that she had had a very good and entertaining afternoon but that we were never to have a drum.
Perhaps this is why we were still disappointed this morning when we opened the window...