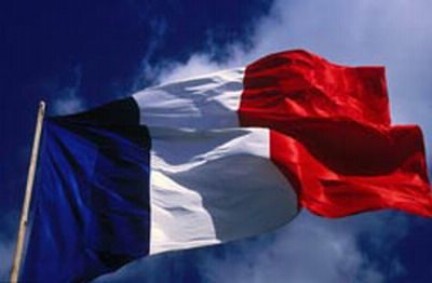 Yesterday was our National Day in France. I have learnt from my English speaking friends that it is called abroad "Bastille Day" but for us, the 14 juillet is the Fête nationale and it is more linked with France as a State and Republic with its main values: "Liberté, Egalité, Fraternité" than with the Bastille and the Revolution.

Perhaps because the Revolution is a very confused time. There was the King, Louis XVI, and the Queen, Marie-Antoinette, and the evil aristocracy from which we were soon relieved; there was the clergy and the Church which were distinct and intermingled at the same time and from which we wanted and did not want to be relieved; there was the enthusiasm of the beginnings, the wars, the civil war, the guillotine, the horrors of the end ... and when was the end? With the death of Robespierre? What happened afterwards? There is a blank of a few years from which springs fully armured so to speak, Napoleon and the Empire and Waterloo and then the return of the Kings and more unsettled periods and revolutions with the rise of the bourgeoisie  and the industrialisation, the pauperisation of the poor and capitalism, and another Empire and war with the Prussians in 1870 and the Commune and another five years blank and then, at last la République.

Almost one century, from 1789 until 1875 to give birth to our State, to Democracy, to the République. Followed with feuds in families, in communities, with wars, with colonialism and decolonialism and post-colonialism and still capitalism and profit. With the turmoil of economic changes. This is difficult but this argues well in favour of a Fête nationale, national festivities, not of a "Bastille Day".

One of my great-grand-fathers used to say that summer began on 14 July and ended on 15 August. He was right: this is the high season for heat, holidays (since 1936), for the reaping of the agricultural products, for the sun and water, for the children plays. 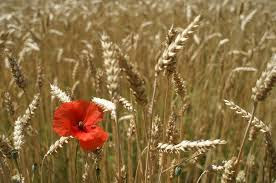 So on this first day of summer according to my great-grand-father, I went early shopping for fresh bread and croissants that are the symbol of extra-ordinary days, ice cream and strawberries. The Litle Family was left at home as  they were still half asleep and would have enough work waking and setting the breakfast table!

Tuesday is market day in The Village and Fête nationale or not Fête nationale, market there is. It is established on both sides of the church, leaving the main square to the ministrations of the employés municipaux, the Village employees and roadmen who water the flowers, sweep the square, empty the rubbish, and prepare the seats and places of the officials in front of the War Memorial.

At nine thirty, the bells were ringing the great peal of bells "saved" for Christmas and Easter services, Whitsunday and  Assuption Day. Peace is definitely set between Church and Republic when it comes to the 14 juillet! It was also ringing for a special service for those who wanted to assist and participate.

But before ebeleven o'clock, most of the feminine population is busy on the market square and in the shops - even in the beloved and / or hated Intermarche supermarket. 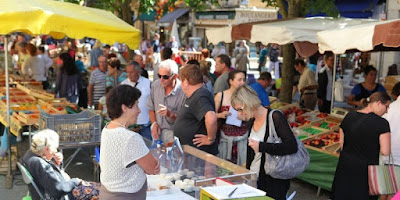 In any case, going to the market after eleven o'clock is considered slothful and is left to the tourists: it is too hot, the best produces are sold and gone, and every housewife is back at home behind half closed shutters, cooking lunch and attending to her duties.

At eleven o'clock, on the 14 July, the main square in front of the church at one end and at the opposite end in front of the monument aux morts (the War Memorial), is empty and waiting for the officials, the Veterans of the last wars (WWII, Indochine and Algérie) with their flags, the fanfare (brass band), and the population almost reduced to the tourists (as an attraction) and the men. We are in the South-West and men are still uppermost in this kind of celebrations linked in the collective imagination to war and death. 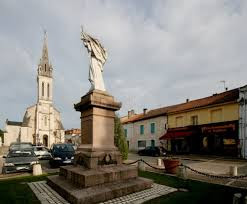 The florist who has been bought the sheaf with the ribbon with the three colours (blue, white and red) is giving a last spray of water to the flowers that will soon wilt under the sun of July and giving it (with the invoice) to the councilwoman who will then transfer it to the Mayor.

And soon all is ready.

The Mayor is here. 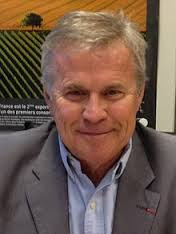 The brass band plays a little military march. The Mayor says a few words about the République une et indivisible (one and indivisible: this is important in our way to think of it and of the State - fundamental nowadays), reminds the audience that our main values are la Liberté, l'Egalité et la Fraternité and that our glorious history is the fruit of our ancestors' sacrifices until death. The sheaf of flowers is passed to him. He sets it down right in the middle before the War Memorial, The band plays la sonnerie aux morts and links it immediately with la Marseillaise, the flags and the heads bow in a silence pregnant and rustling of memories of the past.

And now to serious matters! Once again, do not forget that we are in the South-West of France and that it is the middle of July. Therefore, first, the apéritif. Everybody is invited and may join: it is free and offered by the Town Council. Pastis, Pinault, a little of Bergerac moelleux ... and orange juice for teetoallers, soda for the youngsters who know absolutely nothing about wine and gastronomy!

Second, le déjeuner. The lunch is paid in advance by those who want to participate and trestles have been dressed quickly under la halle (the main covered area for the market). This meal has been called le repas des sans-culottes (the sansculotte meal) in honour of the people during the Revolution who had no Court dress and were wearing trousers instead of breeches. And le déjeuner is composed of the delicacies of the area.

Never tell people that it is not the best cuisine in the world! That would be sacrilegious. All contemplation and pious memories are now shed and sent over windmills. There is but the clatter of forks and knives and the wagging of tongues with roars of laughter. Any anthropologist (even those of Barbara Pym) would consider this as a ritual communion during which the groupreasserts itself and proves its unity. This would look to comics writers (think of Astérix) as the famous banquet of the Gauls, never truly vanquished by Caesar. It is all this and an occasion for people to meet, relax, have fun and revel. The lunch will last long in the afternoon with coffee and pousse-café (liquors). And gossip, jokes, banter as well as deals over which no solution seemed to have never been found.

Little by little, reluctantly, people will leave and go back home to rest, talk more or go through a belated siesta in the shade of trees or inside the cool houses all closed against the heat.

Time for a light and latish souper and then back to Le Village. There is the ball and fireworks to go through!
Adverts have been displayed for some time in the shops or on the boards. 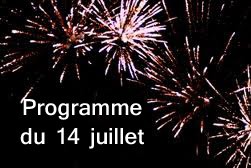 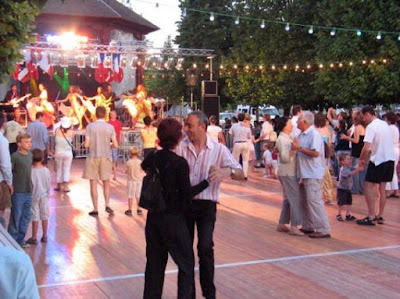 And at eleven o'clock, fireworks over the River. 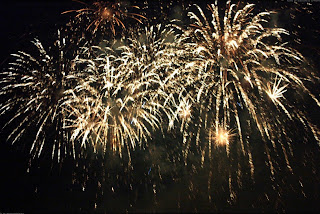 Dance will last late in the night while the temperature will cool and the youngsters will take over with more "modern" music and noise, the more mature citizens coming to their senses after the fun of the day to shake their heads over the follies of contemporary youth.

And what of The Little family during these festivities? A day of quiet and rest. A more soigné luncheon after the breakfast with croissants. Lemon and meringue ice cream some time after lunch. Very light dinner and TV as usual. But while the fireworks were lighting the sky and cracking away, the New Provincial Lady was fighting a very obstinate little bird who had invaded one of the girls' bedroom and did not want to be induced to fly through the open window to join his family. Nothing was able to deter him and he was left the room  to himself why the girl went to sleep in the big bed of the New Provincial Lady after a gallant battle!

This morning, the bird had flown and peace has been re-established at home while another hot sunny day began its blazing course over busy people. Good bye 14 juillet! And yet, if not Bastille Day for the French, you stay all year round with us, on the pediment of the mairie and as the values thanks to which we lead our peaceful lives in le Village. 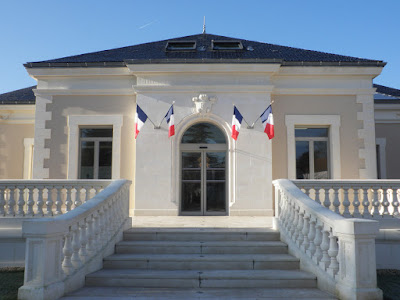 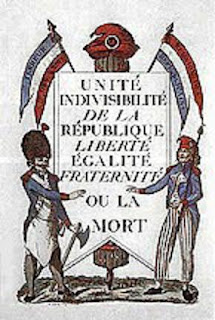