It all began with a garden 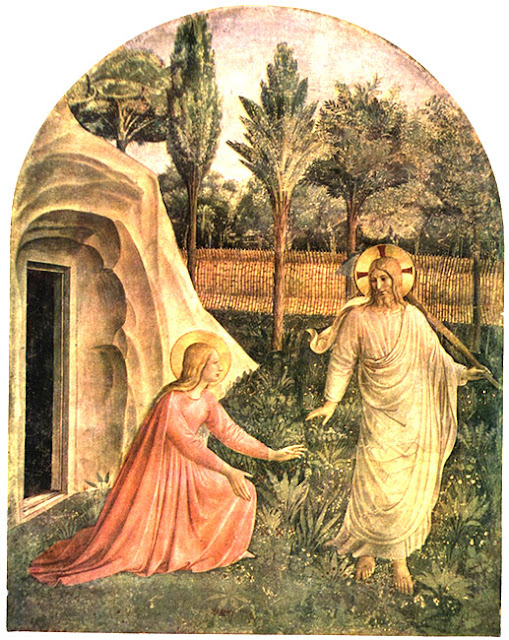 It all began with a garden.

On Easter morning, according to the Gospels, women rush to the tomb where Christ has been hurriedly put on Friday evening, before the great Passover Sabbath. They come to perform the last rites, and on the road, wonder how the tomb will be open to them, by whom, as the round heavy stone has been rolled before the entrance and Roman guards will be there. It is well known, as it is the core of the Christian faith, that there will be no need to open the tomb: it is already wide open and Christ is raised from the dead.

But one of the women, Mary of Magdala, is said to be sobbing and looking everywhere for the body that she thinks has been stolen. She sees a man and believes he is the gardener. It is Christ. He talks briefly to Mary with this famous recommendation first: Noli me tangere. 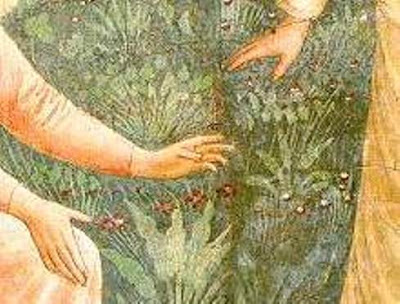 I have already written that I see these Resurrection Gospels as bathed with colours. The Emmaus Pilgrims one is suffused with golden light, Paul and John running to the tomb is all in shades of blues and greens as it is the end of the night, Mary and Christ stand in the rose pink hues of dawn. It is all wrong as the episode of Mary comes before that of the Apostles. And "a garden" in Palestine, close to the city of Jerusalem, has nothing to do with an Italian garden. But rose pink and Fra Angelico, it is for me, when I read or when I hear this text. 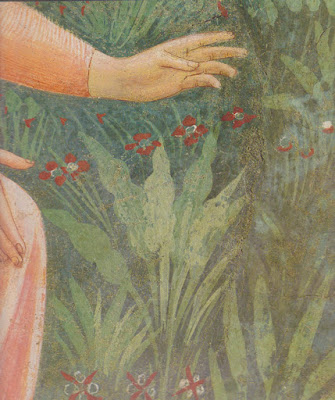 A garden and a man thought to be the gardener by a woman who was forgiven for her sins of pagan and human love.

In the mythical and geographically unknown Garden of Eden, Eve succumbs to the lures of the serpent and God sends her and Adam from the garden to their doom on Earth.

At Easter, God made Man comes back from the dead, meets a woman (before he will meet men) who is forgiven her sins and even commended to men - meets her in a very incarnate and real garden, and sends her to the disciples who are hiding themselves in the well-closed and secured High Chamber of Maundy Thursday – she is the first Apostle - to announce that human beings are now free of death. No doom anymore. 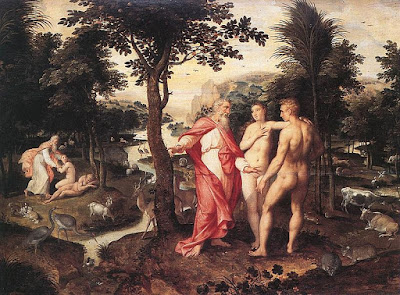 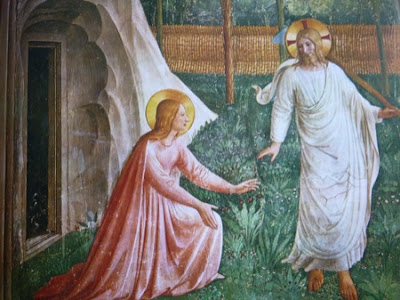 The whole story is upside down.

Believe it or do not believe it, but acknowledge that, stylistically and artistically speaking, the tale is richly satisfying: linear plot ending in a loop, meeting its beginning but with a complete twist.

I am not so naive as to forget why Easter has been chosen to stand in spring and in a garden. It figures and takes the place of older rituals, deeply ensconced in the human mind, under many guises. In the European sphere, there are the Greek and Roman traditions, the Nordic and Celtic mythologies, and others. And this is Europe only. All celebrate the rebirth of nature after the long sleep and death of winter. No wonder the Roman Catholic Church has kept such rites as the blessings of the New Fire (light and warmth) and Water (by which plants will grow), or the image of the cross/gibbet of Christ as the tree that blossoms again. All these symbols are ingrained, embedded in our most ancient minds as Jung has told us. 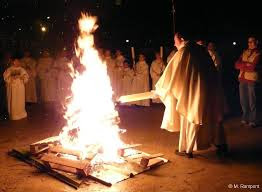 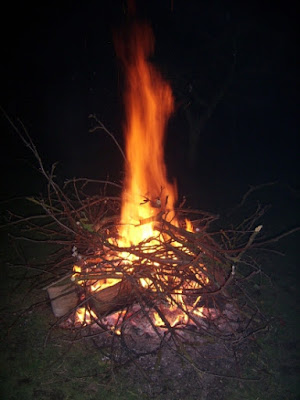 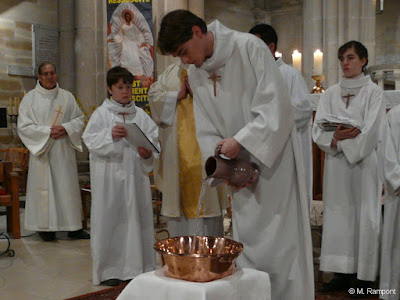 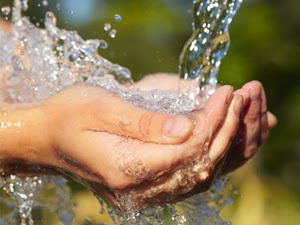 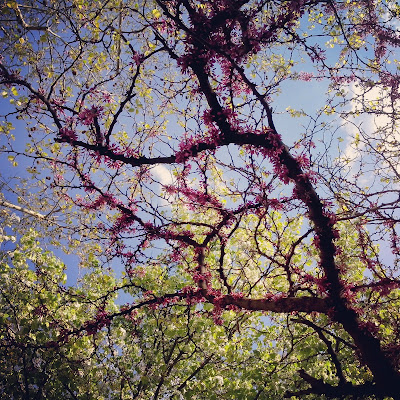 And so did my mind work during this April month.

I meditated on Easter and Easter morning in the garden. Then, when I looked back at my posts during April, I saw that they had recurring themes: rebirth, new projects, tea parties as occasions to rejoice, childhood, the aftermath of childhood in following of adulthood, books, gardens, spring, books, art, music, myths, spring, books, books, books. 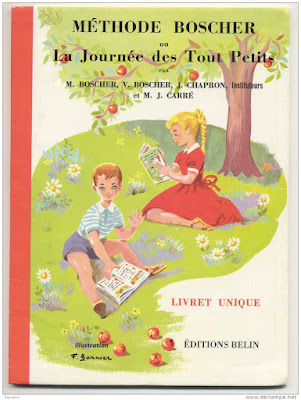 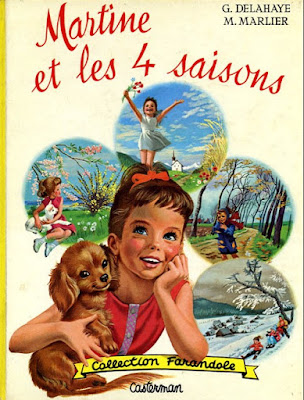 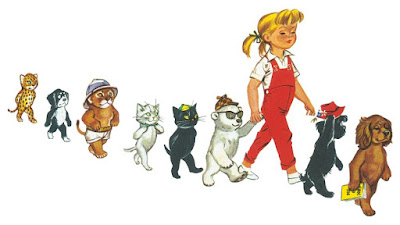 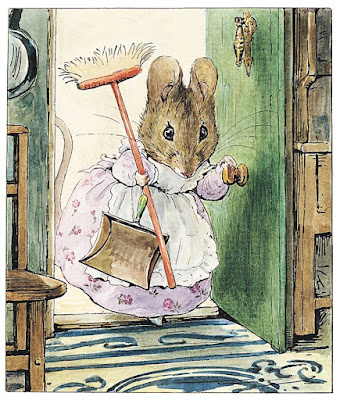 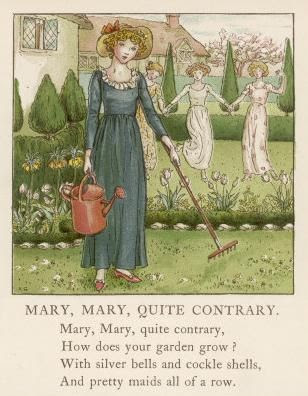 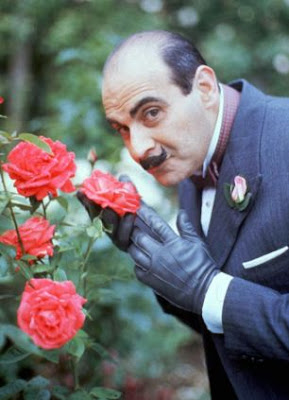 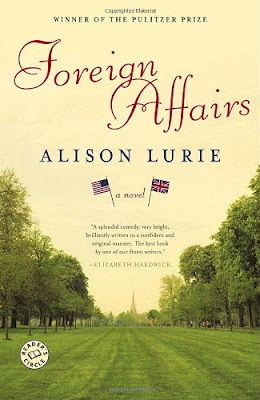 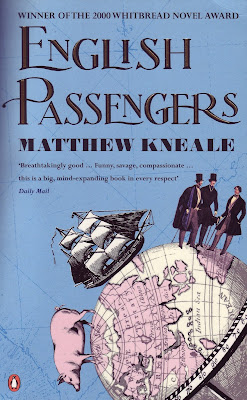 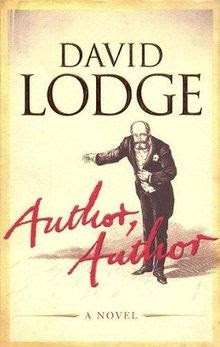 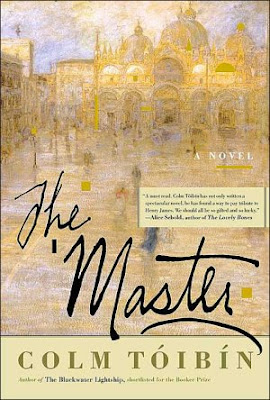 Now, April has turned into young May. My Jewish friends have celebrated Passover and my Orthodox friends, Easter, others, - from Anglo-SAxon ascendance - Beltane. We, Christians of the West, are heading towards Ascension Day and Whitsuntide. Ascension will still be outside, on a mount with a garden on it. And the Roman Catholic Church festivals that go on after Whitsun Day are like a daisy chain of rejoicing, involving flowers. It seems that we cannot leave behind us this moment where Mary of Magdala met Christ as gardener in the garden where the tombs were empty.

Therefore I have kept some more books about gardens to celebrate this time when humanity exults in reborn nature. Among them, I find: 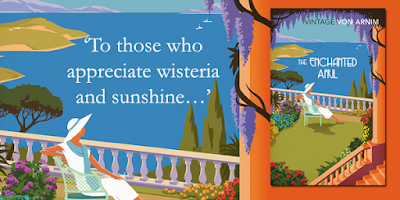 It is an old favourite by Elizabeth von Arnim that comes to mind each spring with its ringing first sentences: "To Those who Appreciate Wisteria and Sunshine. Small mediaeval Italian castle on the shores of the Mediterranean to be let furnished for the month of April. Necessary servants remain. Z, box 1000, The Times." And the fairy tale can unfold itself once more from the March rainy afternoon in London to the riotous and glorious garden where "all is well that ends well". I saw something of this garden once, on a very early morning, awaking in an Italian hotel on the shore of the Mediterranean Sea, near La Spezia, where pink and red azaleas, bougainvillea and mauve wisteria ran wild from a garden at the top of the hill into the blue sea. And, of course, this was joy unblemished. 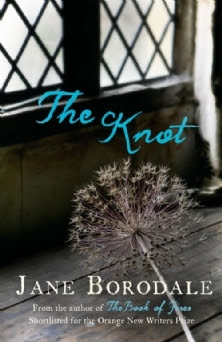 Jane Borodale wrote this novel about the 16th century botanist Henry Lyte, in 2012. I was in such a hurry to read it that I bought it in hardback. It is one of the last books I was to buy. The style is seemingly detached but in fact deeply engaged in the protagonist's point of view. In a remote, damp corner of Somerset, Henry Lyte is still weeping for his first wife, although he has remarried. He has his estate to look to, and a country life that is not so idyllic to go through, as well as nagging family affairs to attend, mostly with his stepmother. Nevertheless, he is wholly engaged in the translation of a Dutch "Herbal", with linguistic difficulties, and with the creation and plantation of new garden with a knot at its heart. Nature is shown in all its restorative and destructive powers before which human achievements are so fragile. One feels here all the warm and physical contact of the 16th century man with his environment and the blossoming of a new knowledge. 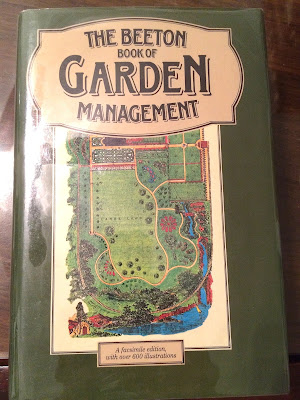 We have an original edition of this book in the library. It goes along with the famous "Mrs Beeton's Household Management" and is full of tips for gardeners of some magnitude. It might have been helpful in another century and with other gardeners as is the famous (at home) equivalent book of management and manners for a lady in the country by Madame Millet-Robinet. The latter deals with meals, menus, poultry yard and other animals under the supervision of the lady of the house, the dresses this one must wear during the day, the arrangement of her vegetable garden, the thickness of the mattresses of domestics, jewels accepted or prohibited for dinners in or out, times to come in the country and time to leave it to go back to town. This was Bible word until Grand-Mother's days. 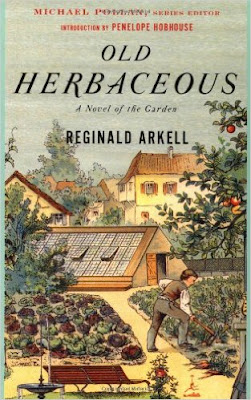 Another example of a head gardener in a great house, but from another point of view: A novel written by the writer of musical plays, Reginald Arkell (1872-1959). Here, he is at his most Wodehousian, creating the greater-than-life, Bert Pinnegar, who rises from awkward orphan to legendary head gardener, "Old Herbaceous" in the style of the perfect Jeeves. Things are exaggerated but it is great fun to read this fluffy candy floss of a book when one needs comfort after a day of toiling in one's garden. Believe me, I know!

One thing is common to all these gardens, from the Garden of Eden to the garden of the Resurrection, and to the gardens and gardeners I mentioned in the books about which I wrote during the month of April and today. They are efforts to tame Nature. Adam and Eve are expulsed from the garden into the wilderness. Mary of Magdala meets Christ and thinks he is the gardener who tends the place where the tombs stand, not forgotten but well-guarded. No need to explain further with the novels.

The poets only speak of nature untamed, some to lament, some to exalt. One thinks of the Romantics of course, far from domesticity. I always felt it was no coincidence that my Italian garden running wild was near La Spezia, where Shelley died. But this poem by William Allingham ("In a Spring Grove") echoes in my heart. It is so close to what I live everyday now.

Here the white-ray'd anemone is born,
Wood-sorrel, and the varnish'd buttercup;
And primrose in its purfled green swathed up,
Pallid and sweet round every budding thorn,
Grey ash, and beech with rusty leaves outworn.
Here, too, the darting linnet hath her nest
In the blue-lustred holly, never shorn,
Whose partner cheers her little brooding breast,
Piping from some near bough. O simple song!
O cistern deep of that harmonious rillet,
And these fair juicy stems, and unexhausted seas
Of flowing life, and soul that asks to fill it,
Each and all of these - and more, and more than these. 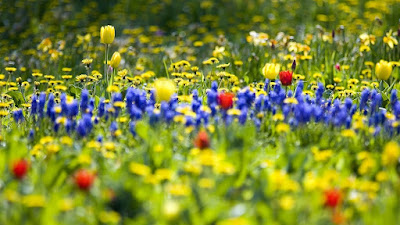 What if the wilderness untamed was not deadly? What if the garden was only a way to keep afar the great God Pan? 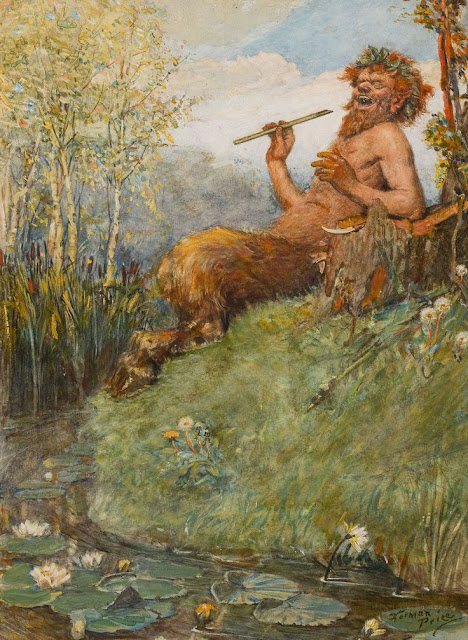