"Valentines" or "How easily life passes by me" 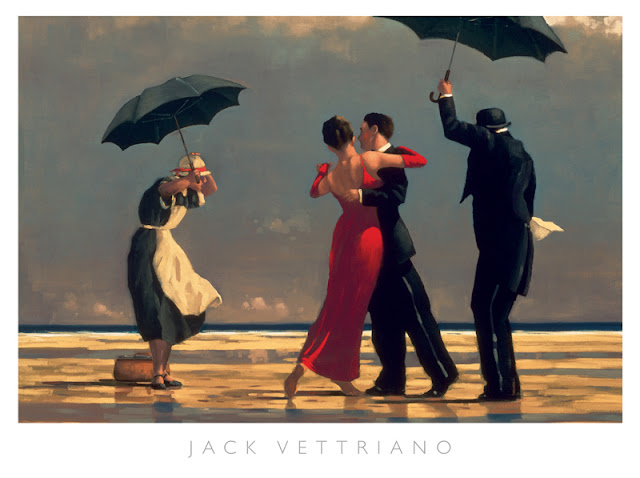 Last year, I received this painting as a Valentine.

And it was the first time I was receiving a Valentine. In France, Valentines are exchanged between lovers or people that love each other. It is no mean symbol. One would not send a card to a friend or an acquaintance or someone of his or her family. Well, I give The Girls Valentines but they are really inocuous. Teddy bears hugging a pillow or a lovely embroidered cushion. Gracious flowers. Swans or birds or butterflies. It is only to say: in this celebration, you are not forgotten; do think that you are loved and cherished; you are important persons. But I to receive a Valentine? Well, I was elated. Furthermore, it was a painting and a painter that my Valentine and I had discussed at some length before. I thought it was so much up-to-the-point. It was a wonderful day. Certainly one of my most wonderful days.

There is no Valentine this year. Well, I should not have expected any joy to last. There is no reason why it should: no one would dream to have a Valentine trailing behind her two, one, more, less, any, disabled person. That was asking too much. And I had forgotten that I was depressed with other side-illnesses. And bad tempered. That was a lovely mistake while it lasted but it was doomed since the beginning.

Instead of a Valentine, I have Lent this year. It began with Ash Wednesday last week, and is now in full swing with the first Sunday in Lent today. My picture for Valentine Day is certainly more spiritually up-lifting but is it as immediately happy? As I am no saint (see the reference to my bad temper above), I doubt I enjoy it as much as last year's... Here it is. 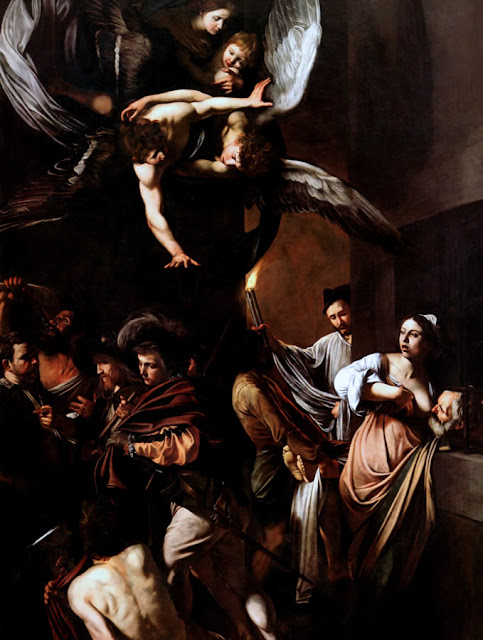 The Seven Works of Mercy
(Caravaggio)

It has been painted around 1607 as altarpiece for the church of Pio Monte della Misericordia in Naples and is still there after four hundred years. It depicts the seven corporal works of mercy that are mentioned in the Gospel according to Matthew, which are traditional Catholic belief, and are also the set of compassionate acts concerning the material welfare of others. Some sort of complement to the Beatitudes of the Discourse on the Mount.

I have better quote art critics about it.

The titular seven works/acts of mercy are represented in the painting as follows:

Bury the dead
In the background, two men carry a dead man (of whom only the feet are visible).
Visit the imprisoned, and feed the hungry
On the right, a woman visits an imprisoned man and gives him milk from her breast. This image alludes to the classical story of Roman Charity.
Shelter the homeless
A pilgrim (third from left, as identified by the shell in his hat) asks an innkeeper (at far left) for shelter.
Clothe the naked
St. Martin of Tours, fourth from the left, has torn his robe in half and given it to the naked beggar in the foreground, recalling the saint's popular legend.
Visit the sick
St. Martin greets and comforts the beggar who is a cripple.
Refresh the thirsty
Samson (second from the left) drinks water from the jawbone of an ass.

American art historian John Spike notes that the angel at the center of Caravaggio’s altarpiece transmits the grace that inspires humanity to be merciful.
Spike also notes that the choice of Samson as an emblem of Giving Drink to the Thirsty is so peculiar as to demand some explanation. The fearsome scourge of the Philistines was a deeply flawed man who accomplished his heroic tasks through the grace of God. When Samson was in danger of dying of thirst, God gave him water to drink from the jawbone of an ass. It is difficult to square this miracle with an allegory of the Seven Acts of Mercy since it was not in fact the work of human charity.


I know, I know. As a Christian and as a Roman Catholic, I should welcome Lent and I should be contemplating and seeking inspiration in this painting, which is strictly and artistically speaking a masterpiece for those who believe in God and those who do not believe in Him. So, why do I feel such a wretch when I compare my two paintings?

God knows, but I have an inkling!