Anthony Trollope and I

It was spring - April, and who has sung "April in Paris"? For I was living in Paris. It was years ago, well before The Little Family and well before I thought of The Village as my home. It was the place where I had almost always spent my holidays or part of my holidays, and I loved it as such. I was still a student. I was too old to follow my parents around the world and my school was in Paris.

My brother had died in the previous September. I was dreadfully shocked, but thought that I had no right to cry or to show my sorrow as this was first and foremost the right of my parents, especially Mother's. I was also too proud to say anything. At last, Mother had gone away with Father, joining him in a sedentary and secure post abroad. I had stayed behind with my Godmother whose four years of work in Paris, per chance, was  being done at the same moment. She was living in what I always think is the most beautiful part of Paris, the top of the 5ème arrondissement, rue Saint-Jacques, near the Panthéon and close to the Jardin du Luxembourg. Bliss!

But she and my parents had thought I was old enough to take care of myself and she had lent me a one room flat she had further down the arrondissement, rue du Cardinal Lemoine. I had a very little kitchen, a bathroom and one room where the bed was sofa at the same time, and the dining table had been changed into a long and wide desk. Shelves along the walls everywhere it had been possible to put them, a tea table, an armchair, four folding chairs, which were either folded or supporting stacks of papers and books, and cushions to sit on the the floor. It seemed to me the height of bohemianism and sophistication at the same time since there was only soft indirect lighting plus the strong desk lamp and the bedside lamp (not much more was required), a chimney place with a great looking glass above and gilded plaster all around it, plaster mouldings looking like pastries in the middle of the ceiling as decoration where the chandelier should have been hanging, and flowers wherever I could put them as I had made an arrangement with a florist who knew the various sizes of my vases and the places where they would be put. A lot of my allowance went into flowers - more than it was reasonable but I thought I was very reasonable in most other things.

To go to my Godmother's and to my School, I had to go up the rue du Cardinal Lemoine for two hundred metres at the utmost and then turn right into the rue des Ecoles until La Sorbonne, cross the boulevard Saint -Michel to Louis-le-Grand, or up by narrow streets to the back of the place du Panthéon to Henri IV. After that, I was free to choose an itinerary to my journeys and my dreams. Most of the time, if I was not in a hurry, I was going by foot, looking at the bus with disdain but looking at bookshop windows with interest.

My life could have been this pure bliss and I saw myself as a character in a Barbara Pym's novel who was dwelling in a bedsitter - not the spinster type but the busy student - if my brother had not been haunting me. I worked a lot and kept myself occupied but there were times when I had to go to bed and sleep would not come or was interrupted by nightmares. My usual "bookfriends" were of no use. I was getting more tired and excited and going to a breaking point without wanting to say anything and without knowing what to do.

One evening after the School, I was going back home and looking distractedly at the shop windows in the rue des Ecoles when I saw boxes full of second hand books on the pavement and a filthy door engagingly open. It was a shop for English books only. There was a youngish man at the counter, muttering to himself, who did not answer to my tentative "good evening", and two or three patrons who were reading freely from oldish volumes that had seen better times. I started browsing from the door, trying to make my way through the various stacks of books or boxes that made navigating in the shop a real steeplechase. I had not gone far when I found a shelf packed with new Oxford University Press paperbacks so thickly that their weight had made the rough plank curve dangerously in its middle. 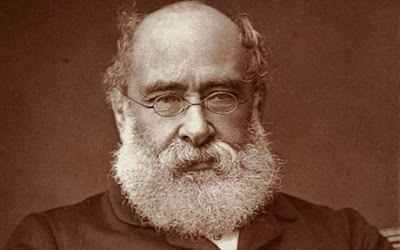 I had never read 19th century British literature in its original language but for School then, and, although I had lived in English speaking countries, my vocabulary and my command of speech were far from being fluent enough for a "classic" novelist. Therefore I had my most brilliant idea never equalled since. I chose the fattest volume of the longest row of books by the same novelist, thinking that either it would keep me awake by doing something clever and improving my English or would send me to sleep far more naturally than the drugs I was given.

I had met Anthony Trollope.

The book I bought was "Can You Forgive Her?", and at the beginning it was hell. I recognised the codes of 19th century literature, the length, the presentation of the settings and characters, the slow introduction of the story, the pace, the digressions. I thought of Balzac, so irritating for some. But my first thought had been right: the language was the stumbling block. I needed a pad and pencil and a dictionary - not only a bilingual dictionary English/French but also a whole English/English (!) dictionary with references to former meanings of words that were (or not) still employed nowadays. The first nights I was so exhausted after a few pages that I went to sleep without any drug. Good! Afterwards I picked up the rhythm of the sentences, and it was a music that lulled me to sleep. I was less and less thinking about my brother's death when going to bed and it was not love diminished but love soothed.

And I made the reading some sort of challenge to myself.

And I learnt to love the research and the struggle to understand.

And I took the book, pad and pencil with me on my walks, sat down in the Jardin du Luxembourg and read.

And I went back to the weird little bookshop to find reference books and to other British bookshops in Paris. And started changing my spending of allowance for less flowers and more books.

As a good French girl I was used of course to the rule of unities defined in the 17th century for plays but that were more or less implicit and respected in the 19th century classic novel - most of all ONE plot. But as in Shakespeare, I discovered that Trollope was weaving at least three plots: Alice Vavasor and her two "suitors", her aunt and her suitor as well, and Lady Glencora being married to Plantagenet Palliser and loving another man. These three plots were answering each other as in a choir voices answer each others or sing together. There was also a political element and references to other characters to what I discovered quickly was another series of novels. One fat book to keep sorrow away had opened the doors of a whole new world. It reminded me more and more of La Comédie Humaine by Balzac.

This is how I became obsessed by Trollope. I bought the whole series of  the "Parliamentary novels" or "Palliser novels": 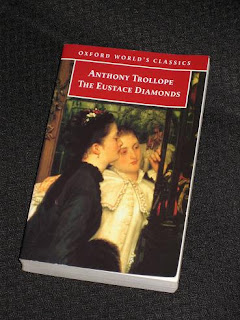 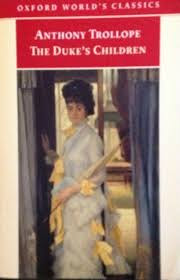 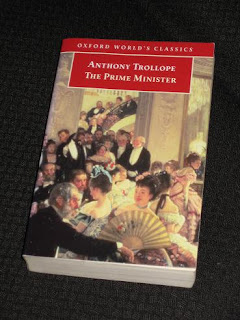 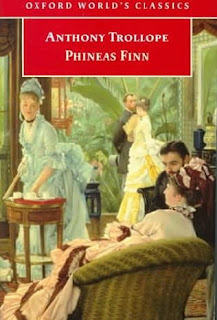 and read them in order, not in this disorderly fashion! I went then to the Chronicles of Barset from "The Warden" straight to "The Last Chronicle of Barset".

I was attracted by some topics like spinsterhood and religion:

or by what seemed a "queer" title:

I was clearly hooked. But I was hooked not only by Trollope but by his contemporaries: I read Dickens, Elizabeth Gaskell, George Eliot, Wilkie Collins, discovered links and families of writers the "Gothics",the "Realists", Lawrence Sterne, then the XVIIIth century, Fanny Burney, Charlotte Lennox, Fielding, Richardson, and down in the XIXth century, the "Sensationalists" through Mrs Oliphant who was polymorph, and the Bloomsbury Group (I knew Woolf, of course, but not the others in the group), and it seemed without end because one book was sending me to another or to the critics and the critics were sending me to Thackeray who was sending me back to Trollope and Dickens and Mrs Oliphant and Jane Austen (but I have never liked the Austen mania and was rebuked by it) and Oliver Goldsmith and further back through Barbara Pym to Sir Gawain and the Green Knight and Piers Plowman, and the Paston Letters, and Chaucer. And I read and read and read and decided to add to my already well loaded studies a BA in English.

I discovered Paris through Trollope. Because I made a mental geography of the various bookshops that specialised in criticism, or those selling English literature, or those selling American literature or both, or adding Canadian and Australian literature. I learnt the ways of the buses through Paris. I was interested in the film adaptations of the novels by EM Forster or what Kenneth Branagh had done with Shakespeare. I had a serious Shakespeare crisis that brought me for short week-ends across the Channel to see plays at the Barbican or Stratford or the National Theatre or Chichester Festival.

I discovered the British Council and the American Library. I went to conferences. I hunted new bookshops I did not know. And I was so lucky to find kind booksellers who guided me through the maze of books to read and others that could be left for later, or others who introduced me to contemporary literature and contemporary trends of criticism. This is how I discovered the Persephone Books and the Virago Books and later the Slightly Foxed Books and the Greyladies Books. All these are reviving these neglected women's books from 1900 to Barbara Pym and Anita Brookner - low voices, almost whispers who took more strength thanks to Nicola Beauman and the Virago Press in the first place.

And even if it is called "falling" from "great literature" to "gentle literature", I discovered Johanna Trollope and Angela Thirkell and DE Stevenson and O Douglas - but I have already spoken of some or shall speak of others.

This is how I begun my one-sided love story with Trollope and with English speaking literature. It is thanks to him that I escaped a bigger breakdown than that I was having, and had, and I begun to live again.

But I am eternally grateful to this little untidy bookshop in the rue des Ecoles, which has disappeared since, and to its bookseller and to the other booksellers who took time to talk with me and guide me. Now, from where I stand, it seems crazy, and I seem both crazy and obsessional but at that time I needed a strong passion. Life today would certainly be easier with The Little Family if I could do the same again...