I have realised only now that I am talking of la Dordogne and its surroundings without showing where all this happens! So, here is a map of France (the French do believe that the whole world knows where their country stands and I do not think otherwise) and la Dordogne is on the North-East of Bordeaux (around 100kms), South-West of Paris (around 500kms), where the arrow points.

It belongs to la Guyenne (name of the past, under the Kings...) and now (as in former times) to l'Aquitaine (remember Eléonore d'Aquitaine who married a French king and then treacherously married Henry II of England? - source of the Hundred Years War...) I am perhaps a little biased on this... ? No, true to myself and country!

L'Aquitaine was much bigger during Eléonore's time (XIIth century) and the realm of France was trying to build itself and centralise things. Did not need the English to come and take some territory from us (being grumpy). The entity "département" was created under the Revolution (1789-1794), the chaos of Directoire and Consulat that followed until the Ist Empire (Napoleon I - 1804-1814/15). It would be rather like a county in the UK or a State in the US. La Dordogne is my Midsomer County. Département capital city: Périgueux; main towns: Bergerac, Sarlat and Nontron. 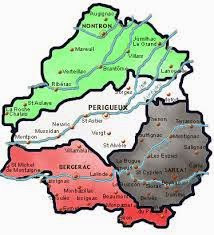 Divided in four colours for the tourists: White (Périgueux) because of the limestone that is the the main soil sub-basement; Green (Nontron) in the North because of the water, rivers, ponds, mists that keep the landscape green most of the year and not as parched as other areas; Black (Sarlat) because of the truffles that are found there, and the trees that cover the ground in some places making few room for light and much for shade; Purple (Bergerac): the wine country with Montbazillac, Saint-Emilion, & al. For more detailed information, please, follow the link: http://en.wikipedia.org/wiki/Dordogne 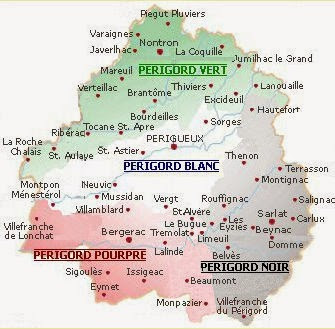 The least touristy area is le Périgord Blanc but it follows the valley created by the River Isle that could make its bed more easily in the limestone. The river crosses Périgueux and goes down to Libourne (before Bordeaux) where it meets the Dordogne River which in turn meets the Garonne Main River at Bordeaux to create the Bec d'Ambès. The Dordogne River flows at the South of the Dordogne département to which it gives its name, through Limeuil, Trémolat, Lalinde, Bergerac...

Unfortunately, we live in le Périgord Blanc. Not touristy but useful. So, fortunately, we live in le Périgord Blanc. The new motorway that crosses France from West (Bordeaux) to East (Lyon) is very close and the railway connections with the TGV (our super-fast railway train) are easy. Perigueux is within easy reach, Bordeaux is now within easy reach as well. We are not too lost in the countryside and yet we live in the countryside!

The house is close to three "market towns", up-graded villages, which are called "bourgs", have a largest population than smaller villages around, a church (RC), a "mairie" (town hall  or Parish Council), kindergarten, schools and high school up to 5th grade (non included), a library (tiny and uncomfortable and without English books), shops, market one or twice a week (what English speakers call farmers' markets), one or two supermarkets (nothing to do with malls or great supermarkets as in the US - human sized!), local administrations and services or Agencies, little factories (industry was important in the 1950s-1970s but  has declined and almost died since).

These are two of these closest market towns: 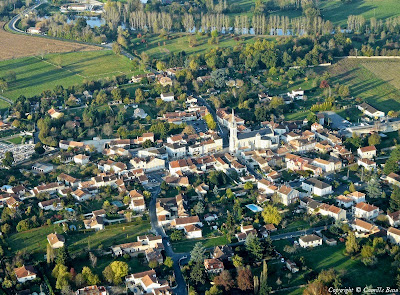 All villages or "market towns" are built around the church. Some of the churches are former priories, sometimes fortified, most dating from a thousand years back with changes made along the centuries. The market towns are also built along or very close to the river.

These were the places inhabited during peaceful times. Most are old habitats, dating from the prehistory and there are 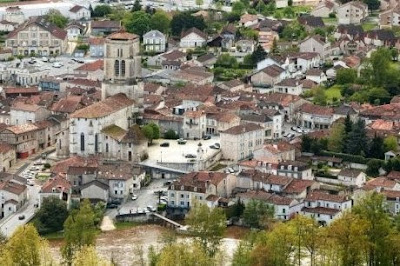 "private caves" with paintings (one friend of  ours had one years ago) and prehistoric artefacts are rather commonly found when digging. Gauls and Romans fought here. Romans had "oppida", their fortified camps on the hills on each side of the river and then went down to the valley and the river where they built their "villae" with craftsmen and agriculture. Traces were found in one of the market town in 1964 when a new factory was built.

In the Middle Ages, fortified castles were built on the site of the oppida. 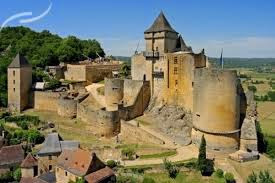 and the simple chapels of old became those fortified priories where the land belonged to the Church. 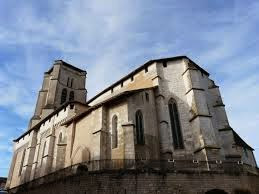 Both were shelters during intestine wars or during international wars as with the English. Later, when the Renaissance came, these fortresses were either transformed or abandoned and new castles were built close to the church, and the villages permanently established in the valley. 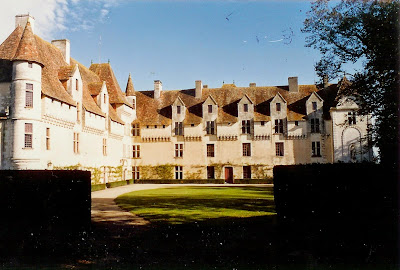 Enough of History and geography for today. Some views of the various market towns to which we go shopping: 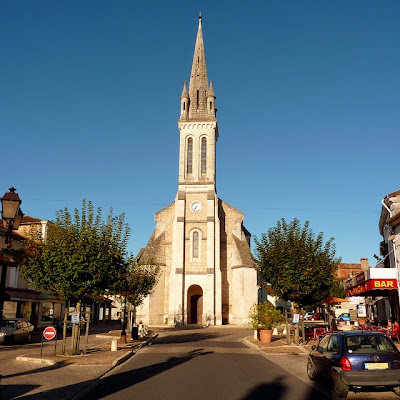 The main square of the closest village. 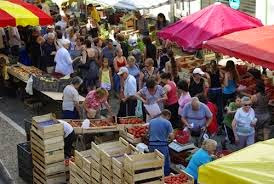 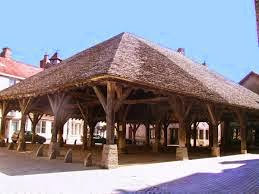 And the river with one of the "new castles (dating from the XVIth century with changes and parts added in the XVIIth and XVIIIth century. 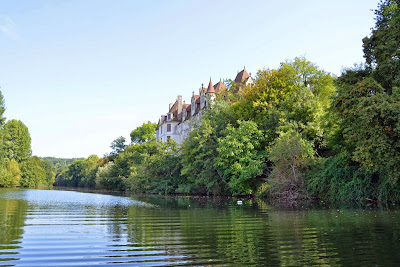 More perhaps other times to illustrate this diary. And more pictures from la Dordogne (the river) itself, which is more impressive!

Why Proust then? Why this title?

In a previous entry I invoked his name and his writing about the small things that come so important an imprint upon our lives like the "aubépines", rosehips, described in the first volume of la "Recherche du Temps Perdu", "Du Côté de chez Swann". Today, I am thinking more of the last volume, "Le Temps Retrouvé". After WWI, the narrator comes back in the "salons"  he has been so eager to visit and that were the centre of his life. But the gauze veil that was giving charm and youth to these people and these rooms has gone and there is some kind of roll call of those who are now dead.

When going shopping and taking time to talk to people my family has known for generations, I sometimes hear the same roll call of the dead. The villages are slowly dying; the centres themselves of the market towns are slowly dying to the benefit of the nearest supermarket or the bigger supermarkets closer to Périgueux or Bordeaux. Young people have no reason to stay in areas where unemployment reigns: they go away, and old families slowly die. Traditions are revived by societies but they do not have the true ring of older days. Our neighbours are coming on holidays, briefly. The long summer evenings when the sky was turning from pale blue and rose-pink to mauve twilight, then to darker and darker blue until it was all black velvety sky and brilliant stars, when I listened to adults talking in a soft breath mingling with the breeze, have gone: no more time for them. 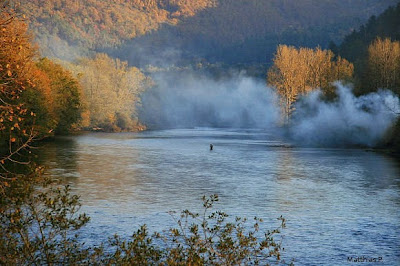